Raymond Lewallen doesn’t mean to single anybody out, but in his latest post on the topic of living better, he observes that

…there is a decent percentage of programmers that are obviously overweight. You’ve heard people talk: that fat, glasses wearing, backpack toting guy MUST be a geek! Even if you don’t wear glasses and tote a backpack with a laptop inside, if you’re plain overweight, people assume you have a high probability of being a computer geek!

So what can you do about it? At the MVP summit, I observed many things (unhealthy things) that I believe people can do to curb their diets and become healthier, leaner people.

So based on events at a geek conference, the MVP summit, Raymond assumes that unhealthy diets and lack of exercise could be at fault. Let me propose another theory based on my experience today on the exhibition floor of the SD West conference. 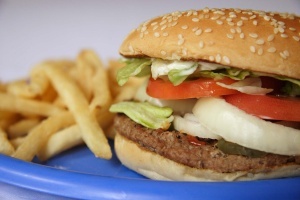 As is common at conferences, several booths were giving out those ubiquitous one-size-fits all X-Large t-shirts emblazoned with a flaccid attempt at being hip and witty. All of this is lost on me as I receive a shirt I will never wear, as it looks like a dress on me. At least it will make a good rag for cleaning the next spill on my kitchen floor.

Contrast this to when I head over to SourceGear’s booth. I had the great pleasure to meet the founder of SourceGear, Eric Sink, in person. He is the author of one of my favorite blogs, in which he writes insightful posts on running a software company and software development in general.

Interesting random connection to Eric: He and I discovered that we both lived in thesame apartment complex in Spain, but at different times.

Back to the story. They actually are giving out shirts that I would consider wearing outside of a conference hall. He asks if I would like one, to which I reply, “Sure!”. It’s his next question that throws me aback.

Uh…excuse me. What was that?

You see, SourceGear had shirts in all sizes! Not only that, they had an ingenious ploy to get everyone wearing them. They were giving out a Wii and said they would randomly walk around and give people wearing the t-shirt tickets for the Wii raffle. Near the end of the day, it seemed like everyone was wearing their shirt.

Then it occurred to me. Developers are so used to being fit into a single mold, we often don’t know better. We often do that to our users, forcing them to conform to our software rather than conforming our software to how users really work.

In the keynote, David Platt gave several examples of sites that work and don’t work. Using the Starbucks website as an example, he did a search for one in his area. It didn’t find one within the selected radius, 5 miles, and gave him an empty search result page asking him to search again. Come again?

As Platt points out, when you’re in need of a coffe, would you ask your friend, “Hey, where are all the Starbucks within five miles from here?”, or do you ask, “Hey, where is the nearest Starbucks?” and then make the decision to go or not based on that information. You do the latter and so should our software.

Getting back to my epiphany. It occurred to me that maybe developers are fat, because we’re all trying to fit into that X-Large conference t-shirt. Perhaps, if more companies focus on the user like SourceGear, we’ll see thinner developers wearing shirts that actually fit. Just maybe.

If so, remember to thank Eric for giving developers a reason to not get fat.