Some people think the ViewState is the spawn of the devil. Not one to be afraid of being in bed with the devil, I feel a tad bit less negative towards it, as it can be very useful.

Still, it has its share of disadvantages. It sure can get bloated. Not only that, but disabling ViewState can wreack havock with the functionality of many controls.

This is why ASP.NET 2.0 introduces the control state. The basic idea is that there is some state that should be considered the data for the control, while other state is necessary for the control to function. For example, the contents of a GridView. The control doesn’t absolutely need this data persisted across postbacks to function properly. You could choose to reload it from the database, Cache, or Session.

In contrast is the state of the selected node in a TreeView. This is state that is necessary for the control to function properly across postbacks.

Unlike the ViewState, the control state isn’t implemented as a property bag. You have to do a little bit of extra work to make use of it. Namely, there are two methods you have to implement in your custom control.

Your custom control must also register the fact that it needs the control state by calling Page.RegisterRequireControlState.

A Demonstration That Makes This All Clear As Mud

This control has two properties. One backed by the ViewState and the other backed by a private member variable. Notice that we register this control with the Page in the OnInit method.

In the OnLoad method, we increment each property. For demonstration purposes, we need these properties to change on each postback, and this is as good a method as any.

In the Render method, we simply output the values of the two properties. So far so good, eh?

Now we get to the LoadControlState method. This method is called by ASP.NET early in the control lifecyle (after OnInit but before LoadViewState) in order to provide your control with the saved control state from the previous request.

In this case, we can cast this value to an int and set the control’s state (the value of controlPostCount) to this value.

The SaveControlState method provides ASP.NET the data to store in the control state as the return value. In this example, we return the value of controlPostCount. This is how we knew we could cast the value to an int in LoadControlState.

Now if I drop this control onto a page with a Button control, let’s see what happens after a few postbacks. 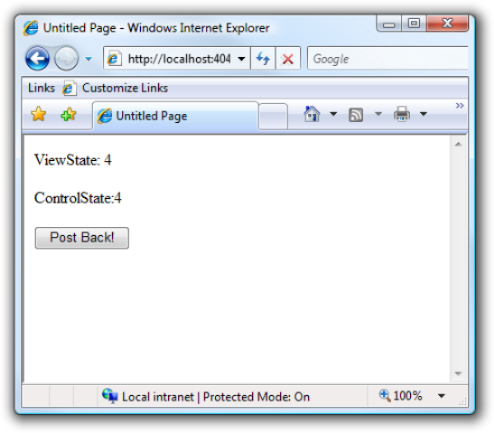 As expected, both values increment, as they are persisted across postbacks. But what happens if we disable ViewState on the page and click the button a few more times. 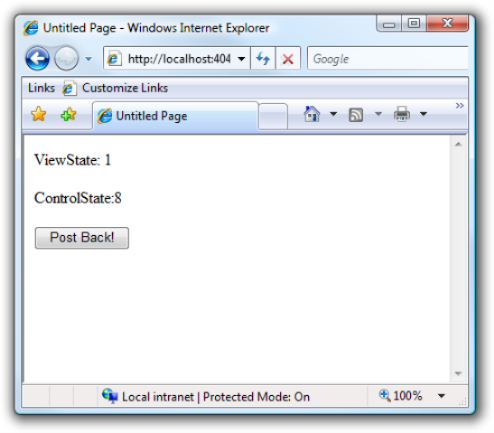 As you can see, we retain the control state, while the ViewState is disabled.

But What About Inherited Controls?

The class I wrote here is intentionally simple to show you no real magic is going on. Let’s demonstrate the proper way to save and load the control state by creating a class that inherits from this control.

In this control, we inherit from the ControlStateDemo control I wrote earlier and added a new property called AnotherCount. The main thing to focus on here is our new implementation of SaveControlState and LoadControlState. We now take great pains to make sure that the base control gets the value it is expecting.

In SaveControlState, the first thing we do is grab the control state from the base control by calling base.SaveControlState. As you recall, this holds the value for the private member controlPostCount.

Since we want to add our own private member, anotherCount to the control state, we create an array to store both values and then return this array to the caller.

We then grab the second element, which is our control state, and set anotherCount to this value.

Let’s look at a screenshot of the result in action. Looks like everything is humming along nicely.

I would recommend using this approach anytime you implement control state in a custom control because you never know when you might override the control state for a base class.