Leon Bambrick (aka SecretGeek) has started a series on Agile methodologies and Test Driven Development (TDD) in which he brings up his own various hidden objections to TDD in order to see if his prejudices can be overcome.

One of the questions he asks is an age old argument against TDD. Who Tests the Tests?Leon sees potential for a stack overflow since, given that the tests are code, and that according to TDD, code should be tested, shouldn’t there be tests for the tests?

The short answer is that the code tests the tests, and the tests test the code.

Let me start with an analogy. Suppose you are travelling with an atomic clock. How would you know that the clock is calibrated correctly?

One way is to ask your neighbor with an atomic clock (because everyone carries one around) and compare the two. If they both report the same time, then you have a high degree of confidence they are both correct. 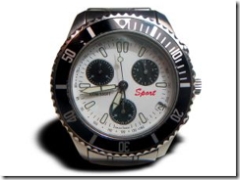 If they are different, then you know one or the other is wrong.

So in this situation, if the only question you are asking is, “Is my clock giving the correct time?”, then do you really need a third clock to test the second clock and a fourth clock to test the third? Not if all. Stack Overflow avoided!

This really follows from the principle of triangulation. Why do sailors without electronic navigation systems bring three sextants with them on board a ship?

If you take measuremnts with two sextants, then you have enough information to decide if both are measuring accurately or if one is not. However in this situation, we need to know exactly which measurement is correct.

So we take a third sextant out. The two sextants that take measurements most closely together are most likely correct. Accurate enough to cross the Atlantic.