No, this was definitely not a good sight for me. With my team pressing the attack, an unfortunate turnover left our defense out of position to help as the opposing team quickly capitalized. 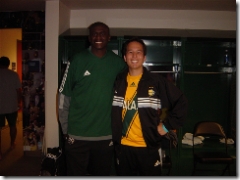 Squinting toward the sun, I saw 6’ 3” Ezra Hendrickson of the Columbus Crew barreling towards me, the last man back on defense. Fortunately his midfielder’s cross was a bit too long, allowing me to pluck it out of Ezra’s path.

With Ezra backtracking towards me attempting to regain the attack, I looked up for a midfielder to distribute the ball to, finding Preki, former U.S. National team player, ready to receive the pass and orchestrate the counterattack.

Might sound like a soccer lover’s wet dream, but this is just a small snippet of what I’ve been up to this past week. I attended the Los Angeles Galaxy’s Adult Fantasy Soccer Camp.

Yeah, the name is a bit snicker-worthy (Adult Fantasy Camp, heh-heh heh-heh?), but such camps are common for other sports such as baseball and basketball. It’s an opportunity for soccer lovers to get a taste of the pro treatment.

For me, it was four straight days of heaven. Two practices a day with former and current Galaxy coaches. Expert guidance from fitness trainers from the company who Jürgen Klinsmann selected to work with the German National team. Guest appearances from several soccer celebrities (though three of them happen to be in my soccer league). 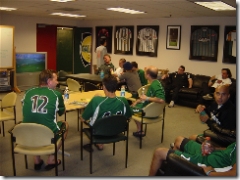 The camp was held at the Home Depot Center, the home of the Los Angeles Galaxy. We used the same facilities they use, including their lockers, their training fields, and their lounge (seen here at right).

When I first arrived, my locker had two kits neatly displayed in my locker. An away jersey and a practice jersey. You can see my jersey in the picture below right. 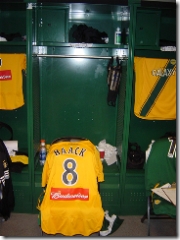 Each day started with a morning session which commenced with a warmup lead by an instructor from Athelete’s Performance. I particularly appreciated their philosophy against static stretching before exercise as it can decrease performance. Instead, athletes get a stretch by working through the natural range of motions in various warm-up exercises. Static stretching is great for after workouts.

Afterwards, we ran through various drills and small sided games led by the expert coaches. The afternoon sessions focused more on actual playing and tactics, with the occasional shooting and defensive drill thrown in.

The Grand Finale of the camp is a full field game with professional MLS referees between two teams chosen by the coaches. On the penultimate day, I noticed the two coaches hunched over their notes furiously picking teams and making trades between the two of them. For the coaches, this was a matter of pride to see who could pick and coach the better team.

Fortunately, our coach is quite shrewd and happened to run into Preki who was there to interview for the Chivas coaching job. After his interview, he was happy to come out and play one half with us.

The coach gave me a decisision to make, would I stay in the attacking midfield, or reliquish the spot to Preki. That, my friends, is a no-brainer. With a player of that caliber around, I moved back to central defense, ready to get my Beckenbauer (actual compliment from a teammate after the game).

Although I felt we were the superior team, we ended up tying the match 3 to 3. A disappointing result considering how much we possesed the ball. Our last shot of the game nicked the post, almost giving us a game winner at the last second.

My friend Donny filmed much of the camp and will be putting together a video for the MLS. Being his carpool partner, it’ll have a lot of me in it. ;) If you’re a soccer lover in or near Los Angeles, I totally recommend this camp next year.