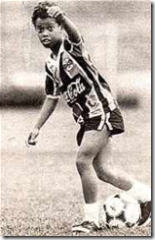 Recently while picking up a few items at Target, I decided to buy a cheapo soccer ball. Now those who know me know I’m a bit of a fanatic about playing soccer, willingly paying good money for a quality ball.

But this ball is not for playing outdoors. I keep it in my office so I can dribble it during breaks, deftly avoiding obstacles on my way to the bathroom, practicing moves during phone calls and long compilations.

It’s a minor thing, but I am already noticing improvement when playing for real, just through the benefits of visualization and practice. I wouldn’t recommend this for every sport. Images of Craig Andera with a hockey stick breaking furniture in his office come to mind.

As software developers, we tend to hold the idea of innate talent in very high regard. How often do you hear software pundits saying, Either you got it, or you don’t.

However, according to a recent Scientific American article, The Expert Mind, this may not be as much the case as we think.

At this point, many skeptics will finally lose patience. Surely, they will say, it takes more to get to Carnegie Hall than practice, practice, practice. Yet this belief in the importance of innate talent, strongest perhaps among the experts themselves and their trainers, is strangely lacking in hard evidence to substantiate it.

The article delves into studies of chessmasters who when briefly shown a random chessboard cannot recall the positions of its pieces any better than non-chessmasters, but when those pieces represent possible configurations due to game play, have a significantly stronger recall.

The article concludes that chessmasters build structures in their brains to recognize patterns in chess, and that to become an expert in chess takes around ten years.

The one thing that all expertise theorists agree on is that it takes enormous effort to build these structures in the mind. Simon coined a psychological law of his own, the 10-year rule, which states that it takes approximately a decade of heavy labor to master any field. Even child prodigies, such as Gauss in mathematics, Mozart in music and Bobby Fischer in chess, must have made an equivalent effort, perhaps by starting earlier and working harder than others.

It turns out that the quality of effortful study is a big factor in moving from novice to expert. So not everyone will become an expert in 10 years, only those who continue to push themselves, examine their weaknesses and strengths, and study accordingly.

I figured I could move past my plateau as a soccer player by creating ways to practice better and more often, hence the soccer ball in my office.

I think the lesson for software developers who wish to keep on top of their game and become experts is to keep exercising the mind via effortful studying. I read a lot technical books, but many of them aren’t making me better as a developer. I pretty much read books on autopilot these days.

It’s not till I actually spend time to think about the implications and applications for concepts in the books, explain these concepts to others, and write code to test my understanding out, that I really feel growth in my craft.

Of course, that leaves me with the question of whether some people are innately more curious or better at studying and finding ways to improve themselves, but that’s a question for the researchers to work on.

If you haven’t already, I recommend reading the article, because my summary does not do it justice.