I love Halloween because it makes for great parties. What makes a party great? Costumes! This past weekend I drove up from Los Angeles to San Jose to stay with my friend Kyle and his wife Cara. That evening we drove up to San Francisco to attend a house party in a large four story house in the hills. It was about the perfect size for the 100+ people in attendance, and they hade a few top-notch local DJs spinning.

Unfortunately, I didn’t bring my camera so I had to rely on “donated pics”. I usually am a total shutterfly. Of course, not having my camera gave me more time to enjoy the party. Click on a pic for a larger version. 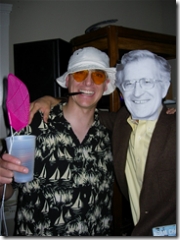 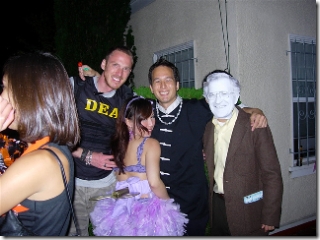 My buddy Kyle went as Noam Chomsky, which was a hit of a costume, as simple as it was. It’s rather freaky to see a black and white 2-D face on a normal body. The face looked almost disembodied. The first pic with Hunter S. Thompson just cracks me up. What a literary powerhouse! I went as the thoroughly unimaginative “Kung-Fu guy”. The necklace I’m wearing is made up of miniature skulls of my enemies. Yes, I fight those crazy Lilliputians.

The DEA agent was probably one of my favorite costumes, just for the chill he sent down the spine of some partygoers. 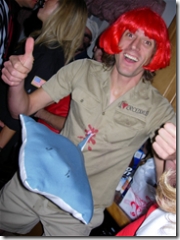 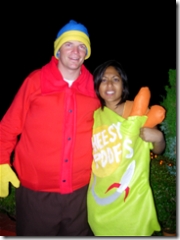 As expected, someone with showed up in a Crocodile Hunter costume, though I don’t understand the red wig. We also had Cartman and his favorite snack in attendance. 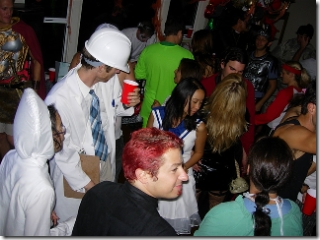 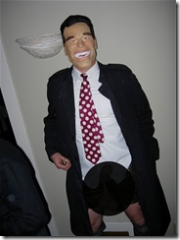 Finally, the governator showed up, but he was inappropriately dressed. I had to black out that portion of his costume. Let’s just say, it took a pretty big circle to black that portion out. Good going Guv’nor!

The beaker costume above was one of my favorites.  She and her boyfriend both were beakers. Apparently the sight of them making out was disturbing.  That’s my friend Jason aka Count Pimpula on the right with his girl Rocel.