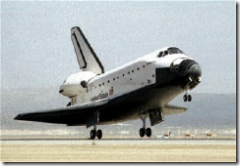 Jeff Atwood writes a great post about The Last Responsible Moment. Take a second to read it and come back here. I’ll wait.

In the comments, someone named Steve makes this comment:

This is madness. Today’s minds have been overly affected by short attention span music videos, video games, film edits that skip around every .4 seconds, etc.

People are no longer able to focus and hold a thought, hence their “requirements” never settle down, hence “agile development”, extreme coding, etc.

I wonder what methodology the space shuttle folks use.

You shouldn’t humor this stuff, it’s a serious disease.

Ahhhh yes. The Space Shuttle. The paragon of software development. Nevermind the fact that 99.999% of developers are not developing software for the Space Shuttle, we should all write code like the Shuttle developers. Let’s delve into that idea a bit, shall we?

Invoking the Space Shuttle is common when arguing against iterative or agile methodologies to building software. Do people really think hey, if agile won’t work for the Space Shuttle, how the hell is it going to work for my client’s widget tracking application?Gee, your widget app is doomed.

The Space Shuttle is a different beast entirely from what most developers deal with day in and day out. This is not to say that there aren’t lessons to be learned from how the Shuttle software is built, there certainly are. Good lessons. No, great lessons! But in order to make good use of the lessons, you must understand how your client is very different from the client to the Shuttle developers.

One reason that the requirements for the Space Shuttle can be more formally specified beforehand and up front is because the requirements have very little need to changonce the project is underway.When was the last time the laws of gravity changed? The Shuttle code is mostly an autonomous system, which means the “users” of the code is the Shuttle itself as well as the various electronic and mechanical systems that it must coordinate.  These are well specified systems that do not need to change often, if at all, in the course of a project.

Contrast this to business processes which are constantly evolving and heavily people centric. Many times, the users of a system aren’t even sure about how to solve the business problem they are trying to solve with software.  This is partly why they don’t exactly know what they want until they have the solution in hand. We can wave activity diagrams, list of requirements, user stories and use cases in front of them all day long, but these are rough approximations of what the final system will do and look like. It’s showing the user a pencil sketch of a stick figure and hoping they see the Mona Lisa.

Later in the comments, the same guy Steve responds with what we should do with users to focuse them.

​1) what do you want it to do?
2) understand the business as much as you can
3) draw a line in the sand for that which you can safely deliver pretty soon
4) build a system that is extensible, something that can be added on too fairly easily, because changes are coming (that is agile-ness)
5) charge for changes

Unlike the BDUF Waterfall approach which requires that you force the user to spew requirements until he or she is blue in the face, with iterative approaches you gather a list of requirements and prioritize them according to iterations.  This helps a long way to avoiding poor requirements due to design fatique. The user can change any requirements for later iterations, but once an iteration has commenced, the line in the sand is drawn for that iteration.

To me, this sounds like the last responsible moment for deciding on a set of requirements to implement. You don’t have to decide on the entire system at the beginning. You get some leeway to trade requirements for later iterations. You only are forced to decide for the current iteration.