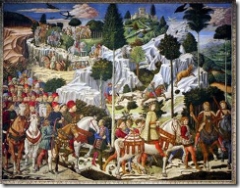 You’re a struggling young 15th century composer (because who lived to be old back then?) in Europe struggling to make ends meet while trying to advance the state-of-the-art when it comes to counterpoint.

Perhaps you’re also dabbling in tonality as the next big thing in music, going so far as to call it Music 2.0 because you know that people are tired of that cookie-cutter modal music everyone else is producing.

What do you do to scrape by?

Well if you were lucky, you’d catch the attention of the Medici family.  Fuggedabout the Sopranos, if you want a lesson in powerful Italian families, the Medicis make episodes of Cribs look like a documentary on poverty.  With immense wealth, power, and influence, they had a big hand in jump starting the Italian Renaissance.

Many of the great artists of the time honed their crafts under the patronage of the Medicis such as Michelangelo and Donatello (thus paving the way for Teenage Mutant Ninja Turtles).  They were also patrons of the sciences, funding Galileo in much of his work.

I started thinking about all this when I read John Lam’s post, Open Source, The Microsoft Community and Funding.  Like the struggling 15th century composer, John is working on something that has a very small niche audience at the time.  However, it also has the potential to be the next big thing in .NET development, who knows?

A project like this is not necessarily something VCs line up to throw money at, because its commercial viability may lie far in the future or because it is ahead of its time and not well understood.  This is perhaps why John mentions in his comments that he is looking for a patron.

Yes, I am looking for a patron, and hopefully something will come out of my meetings here this week.

Another commenter then asks the question…

Doesn’t expecting to be paid for OSS work also belong in the “sense of entitlement” box? That someone chooses to develop and publish software in their spare time is that same as me choosing to go climbing in my spare time, and I doubt anyone will pay me to do that.

I wonder.  Did Galileo feel a sense of entitlement every time he had a bowl of pasta paid for by his patron while working on his equations?  What about Michelangelo?  Perhaps they would have if they were the only ones to enjoy their own work.  In their cases, their work was shared for many to benefit, unlike the rock climber.

In some respects, I see parallels with open source software in the recent direction of the music industry.  Many music critics feel the music industry is stuck in a rut with cookie-cutter music artists who all sound the same dominating the air waves.  The cost to produce a hit is so large, that the studios are unwilling to take gambles on something innovative (with notable exceptions of course!)

Not only that, the music industry is waging a losing battle against technology that makes it essentially free to copy and distribute its product.

Hmmm. What else is free to copy and distribute?  Oh, I know.  Open Source Software!The key difference obviously is that OSS makes this distribution intentional, causing many to wonder whether these people are simply nuts (we are).  Free distribution is the whole point in OSS.

So what is in store for the music industry? Some have suggested that the music industry will die if it does not adapt.  One proposed means to fund musicians is to take a fresh look at the patronage system, though refitted for the Internet Age.  MySpace comes to mind in that regards.  Perhaps some budding Medicis are online looking to start a new renaissance in music.

I’m not enough of a historian to understand the Medici’s true motivations in funding art and science.  Did they do it out of pride in their city to demonstrate to the world how Florence is the source of great art and science?  Was it pure showmanship?  Did someone lose a bet?  Or was there simply a desire to support the creation of beauty, whether it take the form of science or art?

Like I said, I have no idea, but I think the answer might shed light on whether the model of patronage would work today.

Recent discussions around who should contribute to Open Source projects tend to argue (myself included) that those who benefit from Open Source should consider contributing back to it.

Unfortunately only looking at it this way frames OSS as a quid-pro-quo situation.  You get what you give.  But many OSS project founders don’t see it that way.  I can’t speak for John, but I bet he gives a lot to his project without expecting an equivalent contribution from others.  What about the other side of the coin then?

Will we see the rise of the Medicis of Open Source Software, patrons with deep pockets who view interesting open source projects as a form art or science worth supporting because they push their fields forward, whether or not it equivalently lines their own pockets with cash? Or should the only software that be produced be software that is commercially viable, much like music on the radio?

Some are calling upon Microsoft to take that role. If so, would that even be a good thing?  Quite possibly, if done well.

These are all questions I ask myself when I’m trying to procrastinate and start to get a bit too philosophical for my own good.  These are not intended to be leading questions trying to promote one view or another, but rather questions whose answers I am working through for myself.