Of course that assumes that Joel wears a size 9 and a half. 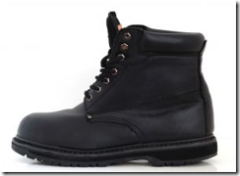 Once again the Joel Cycle takes another turn. The cycle goes something like this:

It really is an interesting phenomenon to watch and participate in. For example, I’ve had my blog post lumped in as part of the angry lynch mob out to get Joel.  All I said was that I found his argument unconvincing. Am I really a part of a mob conspiracy?

Now before anyone jumps down my throat, let me clarify something very important. I have tremendous amount of respect for Joel Spolsky.

There, I said it. I can’t speak for Jeff Atwood, but I would venture to guess that he too has a lot of respect for Joel, despite the big red WTF on his forehead.

Anyone who has thousands of developers dissecting his every blog post and arguing the pros and cons of how he runs his company is doing something very right. I’d love to be in those shoes, running a very successful company with thousands of people invested in what I do and how I do it, whether positively or negatively.

If I were to blog something stupid (and I’m not saying he did, but just for the sake of argument, sheesh!), I’d be lucky to get a couple comments to the effect, “Dude, you’re an idiot.” Heck, I’d be happy if I even generated that level of passion. Rather I’d probably get a comment to the effect of, “I disagree. Nice Post! Buy Xanax”.

The other reaction Joel commonly gets is the I don’t know why y’all are reading him, I gave that shit up a long time ago reaction. I also don’t understand this reaction. For the most part, I think Joel’s signal to noise ratio is very high, and he’s written some really top notch articles on his blog. Just because he says a few things from time to time that you disagree with doesn’t mean you should throw the baby out with the bath water. Sure he comes across as a bit arrogant, but he’s that good.

The last question I often see is Why is everyone paying Joel so much attention? I addressed this very question before in my post, What Is It About Joel?.

In many respects, Joel is the closest thing the software community has to a bonafide rockstar. We’re half expecting to open up our aggregators one day and read about him enrolling in a drug rehab program, but one of those trendy ones in Malibu (or in the Hamptons I suppose with his fondness for New York). Like it or not, he’s opinionated, successful, and a thought leader in our field.

So when he says something controversial, it’s natural to want to provide a counter argument lest some young punk developer at your next team meeting argues vehemently for writing a custom programming language and uses an Appeal to Authority to make his/her case.

Obviously what works for FogBugz does not work for everyone else, but not understands that distinction.

In any case, this will be my last post on the subject of Joel. At least until the cycle begins anew.