Update: You can click on the images (except the vegas one) to see larger pics.

As I mentioned in a previous post, I am currently on a road trip with my younger brother, which explains the lack of blogging.

This crazy kid started off from Anchorage and drove down the Alaskan Highway (which is known for being gravelly and unpaved in parts) and made his way to Los Angeles.  And that is just the first leg of his drive.  His final destination is Luverne, Minnesota where he will live for a year interning with a pastor at the local church.

Despite the crazy conditions on the Yukon roads, he was still able to take this picture of the Aurora Borealis (aka Northern Lights). 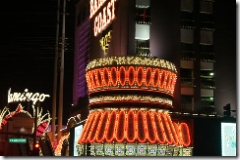 Once in Los Angeles, Brian stayed with us a couple of days before we set out towards Minnesota.  My parents felt more relaxed that I was driving with him on this leg of his journey.

Leaving Los Angeles at around 9:30 PM on Wednesday night we made very good time and drifted into Las Vegas around 1:30 AM.  My screams of “Vegas Baby! Vegas!” along the way did not making any sense to my brother who had not seen Swingers.

Being my brother’s first time in Vegas, it was my older-brotherly duty to introduce him to one of the (many) sins of Sin City -Gambling!

Usually such a duty ends in tragedy for everyone involved, but ours ended well.

After a half hour or so at the BlackJack tables, we were up a bill ($100), easily enough to cover the room for the night and some drinks, and probably turning my brother into a gambling addict for life.  I’m sure his church will be happy with me for corrupting him.

The next morning we headed out towards Denver.  This part of the drive was just amazing in terms of scenery, especially driving through the canyons of Utah.  There were some lightning storms along the way and my brother managed to snap a couple pictures of the lightning from the car.

We are now in the tiny town of Luverne where my brother will live for the next year or so assuming he doesn’t go stir crazy.  This is one of those small towns that seemed to cherry pick the good parts of progress, and not the bad.

For example, people often don’t lock their cars, even leaving them running in the winter when they run into a store to pick up a few items.  Yet they are not so small town that I don’t have a high speed wireless connection at my disposal.

Also, Sioux Falls, South Dakota is only a half hour away and its a reasonably large city.  We drove there last night and saw the falls which are surrounded by red rock, which is where we took this picture.

Tonight I will take an unfortunately long flight home with two stopovers (I wonder if I could just walk and be there sooner).  This road trip with my brother has been a wonderful way to catch up with him, especially now that he’s leaving the nest and becoming a man (although one still prone to fart jokes).

Of course, during the trip, I realized he’s been grown up for a long time, which is hard to recognize when one is an older sibling.

As for me, the hours of driving left me free to reflect and get a bit philosophical. I’ll write about some of this in future posts, I hope.