In my previous post, I outlined some minor changes to the skinning model for Subtext. In this post, I will give a high level overview of how skinning works in Subtext.

Subtext renders a Skin by combining a set of CSS stylesheets with a set of .ascx controls located in a specific skin folder.  If you look in the Skins directory for example, you might see a set of folders like this.

Each folder contains a series of .ascx controls used to render each skin in that skin family as well as some CSS stylesheets and images used for individual skins or for the entire family.

For example, the Redbook template folder contains three skins, Redbook, BlueBook, and GreenBook.  In the screenshot below, we can see that there are three CSS stylesheets that specifically correspond to these three skins.  How does Subtext know that these three stylsheets define three different skins while the other stylesheets in this folder do not?

The answer is that this is defined within the Skins.config file.

There is a SkinTemplate node for each Skin within the system (I know, not quite consistent now that I think of it. Should probably be named Skin).

The Name attribute defines the name of this particular skin.

The TemplateFolder attribute specifies the physical skin template folder in which the all the ascx controls and images are located in.

The StyleSheet attribute specifies which stylesheet defines the primary CSS stylesheet for this skin.

Within the SkinTemplate node is a collection of Script nodes and a collection of Style nodes.  These specify any client scripts (such as Javascript) and other CSS files that should be included when rendering this skin.  As you can see, the tilde (~) syntax works for specifying a path to a file and a developer can specify a media and a conditional for each CSS stylesheet.

I keep mentioning that Subtext depends on a collection of .ascx user controls when it renders a family of skins. Let’s talk about them for a moment.

In the second screenshot above, you may have noticed a directory named Controls.  This contains the bulk of the .ascx controls used to render a specific skin.  There was also a control named PageTemplate.ascx in the parent directory. 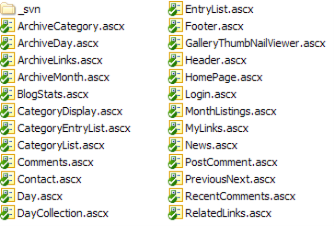 Each skin in a family of skins is rendered by the same set of UserControl instances.  The only difference between two skins within the same family is the CSS stylesheet used (which can account for quite a difference as we learn from CSS Zen Garden).

The PageTemplate.ascx control defines the overall template for a skin, and then each of these user controls in the Controls directory is responsible for archiving a specific portion of the blog.

Select a different skin from another skin family, and Subtext will load in a completely different set of UserControl files, that all follow the same naming convention.

This is one of the drawbacks to the current implementation.  For example, rather than using data binding syntax, each .ascx file is required to define certain WebControl instances with specific IDs.  The underlying Subtext code then performs a FindControl searching for these specific controls and sets their values in order to populate them.  This naming convention is often the most confusing part of implementing a new skin for developers.

It used to be that if a WebControl was removed from an .ascx file (perhaps you didn’t want to display a particular piece of information), this would cause an exception as Subtext could not find that control. We’ve tried to remedy that as much as possible.

In the future, we hope to implement a more flexible MasterPage based approach in which the underlying code provides a rich data source and each skin can bind to whichever data it wishes to display via data binding syntax.

From a software perspective, this changes the dependency arrow in the opposite direction.  Rather than the underlying code having to know exactly which controls a skin must provide, it will simply provide data and it is up to the individual skin to pick and choose which data it wishes to bind to.

We provided the Naked skin so that developers creating custom skins could play around with an absolutely bare-bone skin and see just how each of the controls participates in rendering a blog.