Tonight we had our first game of the new season against Hollywood United who now feature Alexi Lalas and Frank Le Boeuf, among several other former pro and national team players.  Let’s just say the result wasn’t pretty.  At least not pretty for us as they dismantled us 12 to 0.

As bad a beating as it was, it was exciting to be playing against such a high caliber team.  And we managed to put together some good plays, but pretty much looked erratic and rushed with the ball.

I asked one of my teammate’s wife to take some photos, but being a night game, none of them turned out too well.  Here is the best I got showing both these players. 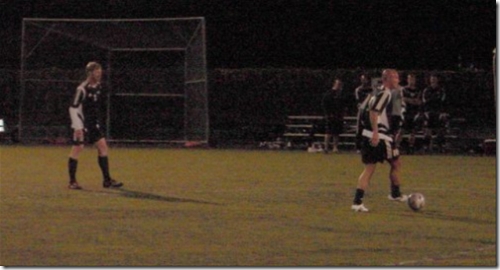 I had one good play in which I dummied the ball, faking Alexi and taking him out of the play as he was hot on my back (I know, I’m reaching here).  Of course later in the game, he embarrassed me with a nutmeg.

After the game we were chatting with a player from their team who is going to be in a new TV show called Heros.  He told us his superpower in the show was that if he touches you he paralyzes you.  Now we know what happened on the field.

Next game we hope to hold them to single digits.  We’re in need of a keeper if you know any former standout keepers.