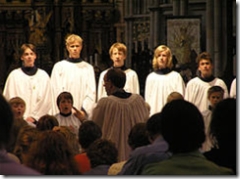 In Jeff Atwood’s latest post entitled Source Control: Anything But SourceSafe he is preaching the gospel message to choose something other than Visual Source Safe and I am screaming amen in the choir section.

There are three common reasons I hear for sticking with Visual Source Crap (I sometimes swap that last word with one that doesn’t break the acronym).

UPDATE: As a lot of people pointed out, VSS isn’t free. What I meant was that it comes with the MSDN Universal Subscription, so many companies already have a copy of VSS.

So is Subversion.  I was on a project recently in which VSS corrupted the code twice!  The time spent administering to it and time lost was a lot more costly than a license to SourceGear Vault.

2. We know how to use it and don’t want to learn a new system.

When I hear this, what I am really hearing is we like our bad habits and don’t want to spend the time to learn good habits.  Besides, Eric Sink already wrote a wonderful tutorial.

3. We have so much invested in VSS.

Well you had a lot invested in classic ASP (or other such technology) and that didn’t stop you from switching over to ASP.NET (Ruby on Rails, Java, etc…), did it?

The reason I spend time and energy trying to convince clients to switch is that it saves them money and saves me headaches.  It really is worth the effort.

For Open Source projects (or any project that receives user code contributions), Subversion and CVS have the nice benefit of a patching feature making it easy to contribute without having write access.