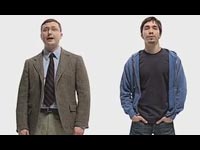 There are many who dislike the ads and claim that the ad is blatantly not true. One example is this humorous and well written rebuttal by Seth Stevenson.

The final straw, for me, is that the spots make unconvincing claims. The one titled “Network” has a funny bit where “that new digital camera from Japan” is represented by a Japanese woman in a minidress. While Hodgman has trouble talking with the woman, Long speaks Japanese and shares giggles with her because “everything just kind of works with a Mac.” Now, I happen to have a digital camera from Japan, and it works just fine with my PC. It did from the moment I connected it.

Good point Seth. Perhaps the ad would have been more accurate had it been a Japanese printer rather than a digital camera. And I mean a printer that really is from Japan. My wife’s dad left us an Epson PM-950C Printer (among other things). This printer is not listed on the Epson U.S. site, but presumably can be found in the Japanese site.

In order to test it out, we plugged it into the USB port on her five year old iBook and printed a web page. Worked like a charm.

Fast forward a couple of weeks and we want to use the printer on my PC. We plugged it in and get the Windows cannot find the driver for the hardware dialog and were unable to print. Effectively, it didn’t just work. I then downloaded a driver that is supposed to be the U.S. equivalent. Still didn’t work.

My wife laughed out lound and said, “See! The ads are right!” I caught myself making excuses explaining to her that there are technical reasons beyond her comprehension and that I just need to toy with it for a moment to get it to work.

But I caught myself. Why am I making excuses for PCs and Microsoft? The experiment was quite simple. I plugged in a Japanese printer into a Macintosh, and we were able to print. I plug in the same printer into our PC (which was recently re-installed) and it didn’t work. Anecdotal evidence, sure, but adds weight to the Apple claim that things just work with the Apple and they don’t just work with Windows.

And responding with, “Well it will with Vista” is not a satisfactory answer. Tomorrow cars will fly, the U.S. will win the World Cup, and we will control our computers by having conversations with them and manipulating holograms. But the fact of the matter is that we all live in today and I will give Apple a bit of credit here.