You’ve probably seen the recent Apple commercials with the two guys holding hands. One introduces himself as a PC and the other introduces himself as an Apple Macintosh. They hold hands because they speak each other’s language. Along comes a Japanese woman representing a Japanese digital camera who sidles up to the Mac guy and holds his hand. The Mac speaks her language too. If you haven’t seen it, you can click on the image below to see it on YouTube by clicking on the image below. 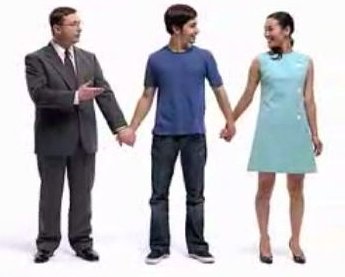 At the end of the commercial, she looks over at the PC guy and says something in Japanese to the Mac guy that elicits chuckling between the two. The inside joke is that she thinks the PC guy looks like an Otaku.

Otaku refers to a specific flavor of Japanese geekdom in which the geek is obsessed with anime, manga, action figures, and video games. In Japan it traditionally has very negative connotations and would be considered a pejorative. It probably has similar connotations to the term Nerd back in the 80s before Nerds became rich and drove Bentleys.

However, this month’s issue of Wired (14.07) has a short article by Tony McNicol that describes how this subculture has morphed into a thriving industry and a trendy lifestyle export.

“Otaku have joined the mainstream to become a major cultural icon,” says Tokyo journalist and social observer Kaori Shoji. “They’ve been lurking on the edge of hip for some years. Now they’ve gone completely legit.” In a recent column for the Japan Times, Shoji wrote about women who were desperately trying to land otaku boyfriends and the trouble they were having competing with the ultrageeks’ preferred romantic companions-racy images of anime idols freely available online.

Ok, so this still isn’t necessarily a unqualified compliment, but associating PC with becoming a hip cultural icon is probably the last thing Apple desires. Apple is supposed to be the hip one wearing shades in the room. Perhaps if the commercial intended to reflect modern shifts in Japan culture, we should see the woman trying to sidle up to the PC guy who would spurn her advances as he is too busy playing Oblivion.