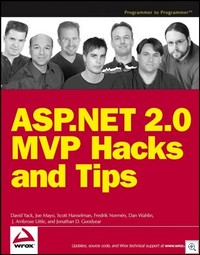 Scott Hanselman mentions a new book in which he is one of the coauthors featured on the cover. Yes, they do look like they are throwing the twelve sided dice on a table with meticulously painted miniatures. If you have no idea what I am talking about, you have never embraced the inner geek.

The reason I mention this is that In 2005 I wrote a post in which I presented an Abstract Boilerplate HttpHandler. This particular post was inspired and built upon Scott’s original (non-abstract) boilerplate HttpHandler. And now it comes full circle as Scott has borrowed from my borrowing, cleaned it up a bit, put a tie and suit on it, and then put it in a book.

Nice work! Now in order to one-up him, I will have to borrow from the book (which would be borrowing from a borrowed borrow) and get a Hollywood movie made. Keanu Reeves stars in Abstract Boilerplate HttpHandler I - The Pipeline of Opportunity.

So among this book of MVP hacks, they have inadvertently included a Haack.