I have never worked as part of a shrink wrapped product team, which makes working on Subtext the closest thing to the experience. When a product team releases a product, they often stamp it with the acronym RTM, Release to Manafacturing, which is more and more becoming a misnomer as the only manafacturing being done is the manafacturing of hyperbole by the marketing team. 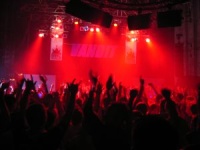 The other thing a product team does when they release is throw a release party! With an open source project with no funding, that is a bit more of a challenge. The party sort of gives double meaning to the word “release”. Shipping a product and the release party provides a release from the stress of getting the code ready for RTM.

At least that’s how I imagined it. I thought that after the release, I would feel contentment, euphoria, and relief, all without the help of a drug. Instead, I feel foreboding, anxiety, and fear.

The fear that there we left something important out. The fear that there is yet some hidden but treacherous bug left in the code that will jump out at the wrong moment and eat the first born child of a user (or it might run format c:\ if the user is childless).

I am guessing this is pretty typical of the actual experience of releasing a product. This is the real feeling one gets, which is why they resort to getting really sloshed at the release party, to quell these disturbing thoughts.

Fortunately there are a few things that allay these fears. First is the extensive testing we performed (along with the nice suite of unit tests). As with any product, there will definitely be a few bugs that get uncovered, but they aren’t likely to eat anybody’s kids.

Secondly is the great team of developers from all over the world that participated in getting this first release out there. It is nice to know that when I hit the sack for some shuteye, somebody in Italy, Turkey, New Zealand, etc… is just getting around to taking a look at the code. Eyes are on the prize 24 hours a day. :)