I love this post by Steve Yi (found via Raymond Chen) concerning the mysterious things he as eaten. It just goes to show you that us asian (and half-asian) brothers can eat some seriously weird crap.

I have never tried Sea Cucumber (that I know of) nor Kudu Doo-Doo, but I have had everything else on his list. Here is my own list of mysterious things I have eaten.

My wife introduced me to this foul smelling Japanese dish. At first I wondered why she was eating the garbage when I first took a whiff, but I realized that others have said the same thing to me when I would bring Kimchee to school back in the day.

So I told myself I would try and acquire the taste since I was curious why she liked it so much. It has worked, as I now love it. 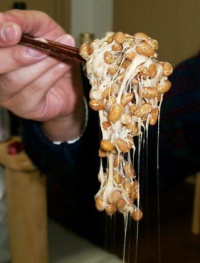 For this dish, I have my wife’s brother to thank. Again this is a gift from the Japanese. Apparently there are several places known for serving raw chicken. I suppose if I was to take the risk of eating raw chicken anywhere, it would be Japan. They are well known for their cleanliness and care in crafting food.

It tasted a lot like tuna sashimi (maguro) and was quiet delicious.

I guess Japanese food in general is mysterious to me. I wrote about this experience here.

The first time I had this I nearly gagged. But I have since learned that the first one I tried was not of the highest quality. When a master sushi chef prepares Uni, it is smooth like butter. 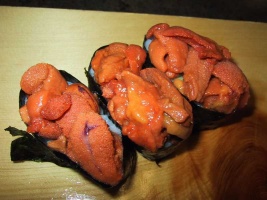 This one is often served at a Dim Sum restaurant. My Chinese friends might not find this so mysterious, but I sure do. I am not a big fan, and I’ve given it a couple of chances.

I am sure my wife will remind me of even more mysterious things I have eaten. What are yours?