When you hear the phrase, “use your head” you are typically being told to think. There are other uses of the head that are quite unwise. For example, trying to clear a soccer ball away from another player rushing in on the attack when you are a step too late. Unfortunately that’s exactly what I tried today.

My head just happened to get in the way of the shoulder of the onrushing soccer player when we both jumped to try and win the ball. It was really no contest as his shoulder won, leaving a nice inch long laceration on top of my scalp. Fortunately it wasn’t very deep and I was not knocked unconscious, though I bled a lot and had a nice Tom & Jerry bump on the head. 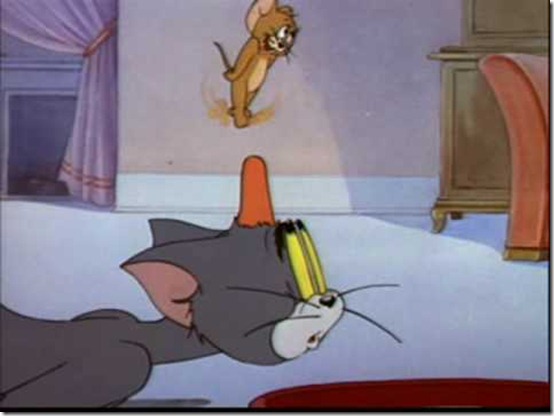 This earned me a trip to the ER which is NOTHING like the TV show. If it were, the show would have been cancelled after the first episode. I fail to see how interesting a show would be where the patients wait around for four hours before a doctor sees them to perform a grand total of five to ten minutes of actual work.

In any case, the extremely busy doctor made quick work of cleaning out the wound and stapling it shut with two painful squeezes of the stapler (no local anesthesia). I hadn’t realized how helpful office supplies could be when applied to the head.

The doctor said I show no signs of a concussion and should be ready to play again in a few days as soon as I feel comfortable. I’m glad I’ll be able to play next week, but I won’t be using my head as much.