Upon returning from any vacation, I usually have a great desire to upload all my pics to Flickr and give each one a detailed, witty, interesting description. About five pictures into the process, I grow fatigued and give up on the whole process. So what if the picture is named DC32101?

Also, with jet lag, it makes it difficult to focus. So rather, I’ll post a link to the pics on Flickr for those of you who enjoy that sort of thing. 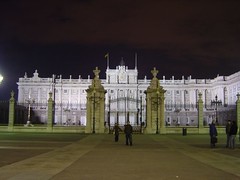 For the rest of you, I’ll post some highlights. We started the trip off in Madrid. We were only here for one day and didn’t get to see much. That wasn’t a problem for me since I lived around here for three years already. To the left is a picture of the royal palace at night.

While in Madrid we also visited Torrejon de Ardoz, the place where I lived back in the day. Not much to look at, but it has sentimental value for me. 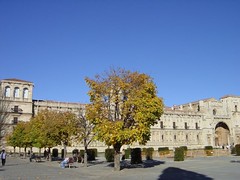 Our next stop was in Leon where we stayed in a magnificent Parador. A parador is a government-owned hotel, often in a converted historical building such as a castle, monastery, etc… I think the one we stayed on was a converted palace or castle. Apparently it also served as a jail during the civil war.

The parador has its own cathedral attached and an internal cloister. It was really beautiful inside and out and the best part was that we were able to explore on our own. It really felt as if we were staying inside a museum exploring ancient nooks and crannys. 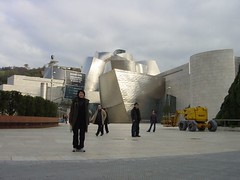 From Leon we headed over to Bilbao, home of the very famous Guggenheim Bilbao museum designed by Frank Gehry. From what we learned, the inspiration for the design is a Salmon. It is hard to tell from this picture, but the museum has the shape of a very large fish. Its outer walls are made of titanium sheets and must have given the construction teams and engineers nightmares with its odd angles and shapes.

What was most interesting to me was to learn that before this museum was built, Bilbao was a pretty industrial city with very little of interest to tourists. However, with the introduction of a beautifully designed museum, the entire city became devoted to design in some way or another. Everywhere we looked we found interesting touches of design such as the entrances to the metro. 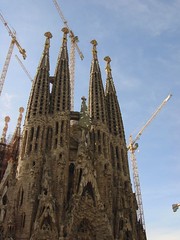 Our last stop was the lovely city of Barcelona located in the Catalunya region of Spain. Though as one graffiti sign reminded us, “Catalunya is not Spain”. Catalunya sees itself as a fairly independent entity and Barcelona is its capital.

The architecture in Barcelona was dominated by a single great architect, Antonin Gaudi. It seemed that nearly every significant building in the city was either by Gaudi, or a disciple of Gaudi. His most famous work is the unfinished cathedral, Sagrada Familia. It was intended to be a project that would be left to future generations to finish, and construction continues to this day. 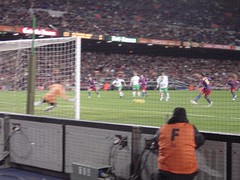 The highlight of our trip (at least for me) was our fantastic seats at the FC Barcelona game. In the pic on the left, you can see how close to the action we were. That’s a picture of Ronaldinho actually missing a penalty kick. No worries, as he had another opportunity later that he converted during their 4 to 1 win over Racing Santender.

FC Barcelona is clearly the pride of Barcelona, especially after their recent 3 to 0 dismantling of Real Madrid, Barcelona’s perennial arch-nemesis.