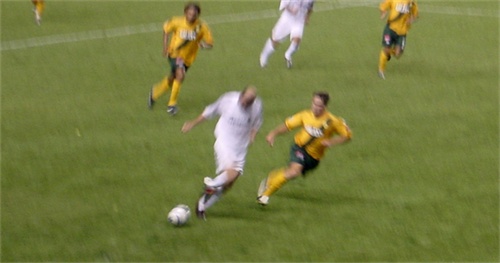 You know how in Monopoly you can draw a Community Chest card that says “Bank Error In Your Favor, Collect $200?” We had one of those moments regarding the Real Madrid vs Galaxy game.

The Galaxy put in place a rule that in order to purchase tickets to the Real Madrid game, you had to purchase as many tickets to another Galaxy game. A somewhat sleazy tactic to raise sales, but I wasn’t complaining too much. I figured more soccer is better than less.

So I sent emails and got on the phone to customer support last Friday to no avail. I discovered that we only were charged for one ticket, so I began to worry that we would not be able to pick up another ticket because the game was sold out. Yesterday, I spent an hour or so trying to work my way through customer support to make sure our other ticket would be there at the box office and would be seated next to the first ticket.

When we got there, the will call line was a mess. It seems that everyone who bought via the Galaxy Online website was having problems with their orders. Apparently they were unable to send out all the tickets they intended to and got a lot of orders wrong. The line was held up as they tried to print the tickets from the system while scalpers hovered about offering tickets for $200 a piece.

I wanted to hand the Galaxy my business card and tell them I can help build them a new software system and business process to improve their ticket sales management. ;) Meanwhile, those who purchased from TicketMaster seemed to have no trouble at all.

Sure enough, when we got there, we got a second ticket in a completely different section. However, it turns out that they could only give us a $75.00 ticket in a much nicer section (which I think they comped us). Not pleased with the prospect of my wife sitting alone, I figured we would both check out the section to see if there were empty seats.

It turns out that the ticket was in an ideal location, section 108 row M right near midfield, much better than our original seats. We decided to try it out and we ran into a couple of soccer buddies (one who works for Fox Soccer Channel) and a few empty seats in a prime location in section

The game itself was quite entertaining. It was clear that the Galaxy was overmatched, as Real Madrid scored early and with ease on the part of Zidane’s superb play. However, the Galaxy put in a good showing and showed some grit. The highlight though, was Zidane’s amazing control and composure with the ball, not to mention scoring midfield seats.