So it’s maybe thirteen years too late, but I finally have my first pair of Air Jordans. Yeah, they don’t have anywhere near the cachet they did back in the day, but hey, better late than never. Here’s a photo to commemorate the occasion. 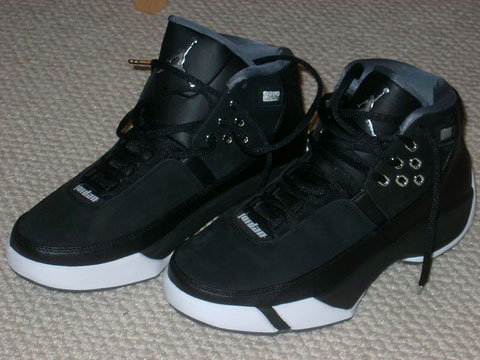 Michael thanks you… all the way to the bank.

I remember when I was a high-school ball player (made JV. At 5’ 9”, I was a bit short for Varsity), I positively drooled at the idea of owning a pair of Air Jordans when they came out. They defined hotness for the realm of basketball shoes, though they seemed to do little to actually improve my teammates’ skills. I remember one point guard in particular who claimed the coveted title of being the “First” to own a pair (Remember how important it was to be the “First”? New toilet model coming out. I had it first!). He would show up to practice in head to toe Jordan gear complete with the tongue sticking out and proceed to build a very sturdy tenenment with the bricks he tossed up.

To justify this purchase, I give you a picture of my last pair. As you can see, I do wait till the last minute and beyond, before buying a new pair of shoes. Now excuse me while I purchase a new pair of Copa Mundials to replace my thoroughly trashed soccer cleats. 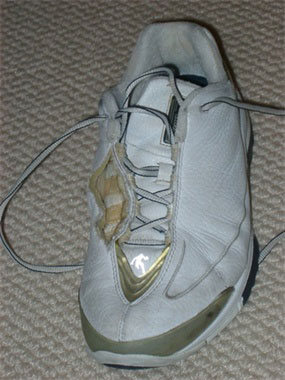 Look what the cat dragged in.