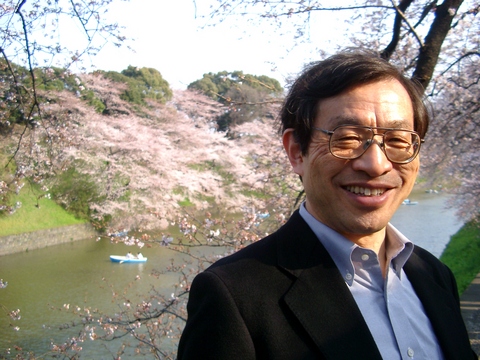 Akumi received a very tragic phone call yesterday afternoon from the San Diego county medical examiner’s office. Police had found her father, Hideo Yokoyama, pulled over to the side of the road with his windows down. While driving, he suffered a heart attack and died from cardiac arrest.

Only last weekend we had a great time with him down in San Diego. The fact that we saw him so recently has been good for Akumi. Though stunned and saddened, we both remember how happy he was, throwing back a beer together over fantastic food.

Akumi’s father loved to work, and spent nearly forty years doing so as an engineer at Sony. He is, in many ways partly responsible for all the Triniton televisions in the world. In the later parts of his career, he was challenged by a colleague who said to him…

We’ve sent all these Trinitrons out into the world. We now have a responsibility to do something about them when they return.

This was a turning point for Hideo, who then focused his energies on electronics recycling. He spoke at many conferences and worked hard within Sony to take a lead in recycling efforts. In many ways, Japan is way ahead of the US in this effort.

His efforts landed him a two year post as CEO of a joint venture between Sony, Panasonic, and several other electronics giants to research and promote recycling technologies. The member companies appointed an employee to this position for two years at a time on a revolving basis. He was a believer in sustainable modes of production.

After retiring from Sony, he took a position as President of a Japanese company with operations in Tijuana. Residing in Chula Vista, Akumi and I had the great privilege of seeing him once a month.

My fondest memory of him is that of my second or third trip to Japan with Akumi. We were staying with him at his apartment and we had just returned with some Yakitori. He had bought a bottle of Nigori (unfiltered) Sake (my favorite) for this occasion. He grabbed the bottle, looked at me with a mischevious grin, and said, “Phil. We are not leaving this table until this bottle is empty.” Suffice to say, I had to enlist the help of Akumi to get through it, but get through it we did.

On Tuesday, Akumi’s mom, brother and his wife will fly in from Japan. We will drive down to San Diego and take care of arrangements.