Yesterday, along with Akumi’s uncle Tadashi, we visited her grandmother at a rest home. She’s a spunky 90 year old woman and gives me great insight into where Akumi gets her rebellious nature from. We took her for a walk and I jumped onto a thin railing. Her reflex wasn’t to wave me down for my safety, it was to reach out as if to push me off and cause me to crack my skull. We made sure to push her wheelchair to the edge of the river as if to push her in. We all had a good laugh afterwards. 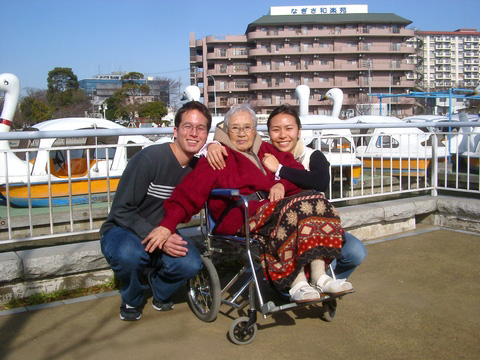 Katana Afterwards we walked over to the uncle’s house. Akumi refers to him as the “Harley Davidson” uncle as he rides a Harley and is in love with the Harley brand. He was wearing Harley jeans and a Harley cap. When we arrived at his place, he showed us his 200 year old Katana. 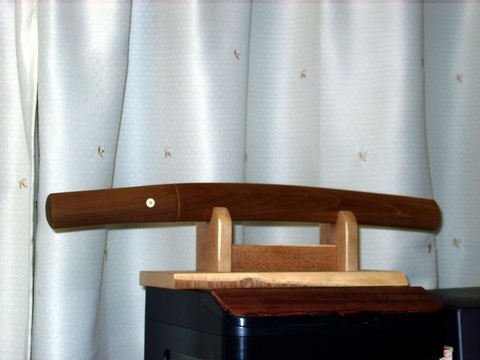 The Katana in its case. Tadashi made the stand himself.

It’s a beautiful piece of craftsmanship. Every two weeks he cares for it with a strict regimen to ward off rust and keep its beauty. Should he require a sharpening (which probably won’t be required) it costs $100 per centimeter to sharpen properly. It’s a collector’s item worth over $8000 made by some guy named Hattori Hanzo (ok, the Hattori part isn’t true). 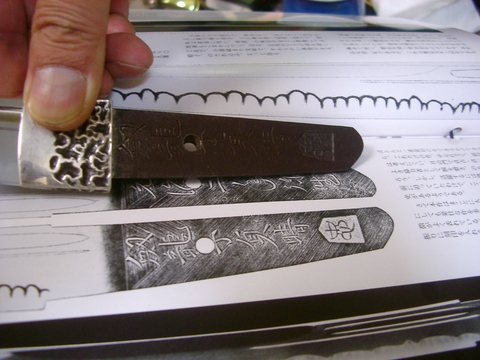 Tadashi shows us the engraving on the hilt and a matching monograph in a collector’s book.

Tadashi explained to us that Samurais went to great lengths to take care of their swords and a good way to get yourself killed back in the day was to carelessly handle or knock down a Samurai’s sword. That would invite a fight to the death. Only then did Tadashi let me handle the Katana and I took great care to show it the respect it deserved.

Displaying the ferocity and skill that would have made me a great samurai. Or samurai fodder.

Seppuku Tadashi has a sense of humor similar to my dad’s. He told us that when he’s unable to care for himself, he’d prefer to commit seppuku than waste away in a rest home. My dad always tells us that when he can’t wipe himself, drive him out the backwoods of Alaska and let him loose for the bears to find him.

When a samurai was dishonored, he would commit Seppuku in order to regain his honor. Today, dishonoring oneself is a sport displayed on reality television.

Sometimes this is referred to as Hara Kiri, though Tadashi tells us that Seppuku is the correct term. Hara Kiri and Seppuku are the same characters in Japanese, but they have two different ways to pronounce them.

The act of seppuku required the samurai to essentially dissect himself with a katana while another Samurai chopped his head off to finish the deed. The sword the other samurai used was specially made for this purpose as just any sword will not do. To test the sword (see, “test first” is not a new thing) they piled dead decapitated bodies one on top of the other, in what must’ve been a pleasant ritual, and then attempted to cut through as many as they could with one strike of the katana. Afterwards, the katana was carefully engraved to document the number of bodies it cut through. Thus a “three body” sword meant it cut through three bodies.

Tadashi showed us a picture of a sword with an etching of “Three Body Sword” on one side. On the other side it said “After re-engineering, Four Body Sword”. I want to know where they got all these bodies for testing. I’d hate to be the QA department for a seppuku katana.

In the next two pictures, Tadashi demonstrates Seppuku. 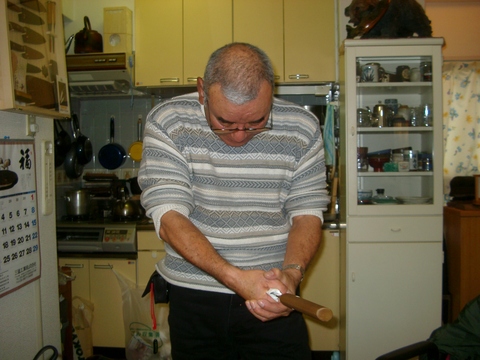 Step 1, insert the blade here. Be sure to disinfect first. 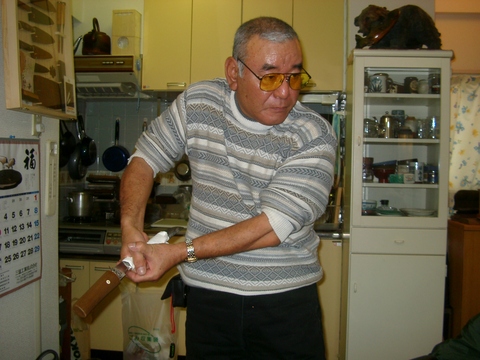 Step 2, slash across here. Be sure to cut into the major organs. Doesn’t that feel nice?

For women who had been shamed, they would often kneel down to commit seppuku and were permitted to lean into the blade, bracing the hilt on the ground if they did not have the strength to cut themselves.