It was really just a side question of this post on Rory’s blog having nothing to do with the main topic (some blather about Jury duty bla bla bla). For 50 bonus points, the question was what game featured the quote “You have summoned an elemental”? 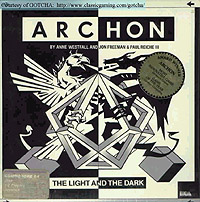 My winning answer was Archon, thus securing the 50 pts redeemable for fame, fortune, and street cred. Interestingly enough, the question summoned a swarm of geeks reminiscing about the good ol’ days of gaming on the Commodore 64 in the comments section.

For good reason, Archon was a joy to play. I loved that game back in the day. It was pure fun. Technically, I didn’t play it on a Commodore 64. I had a Commodore 128, which I know is the same thing really, but it was a larger number and it had some funky CP/M mode that did nothing for me. In any case, in the comments of that post, I found that there’s a remake effort for Archon. Awesome! It’s interesting to see that there’s a thriving C64 retro gaming community with a C64 emulator to support the cause.

As can be seen by such communities, the C64 inspired huge loyalty among its fans back in the day which is still going strong. Heck even I joined in the computer worship with my C64 formatter for Rss Bandit. Of course once I upgraded to the Amiga 500, my Commodore 128 turned into a large paperweight. At that point I was a slave to Speedball, Pirates!, and the Bard’s Tale. Not to mention the Ultima and Phantasie series.