Yesterday was a crazy day. Our production site runs on an older Dell disk array with three logical volumes each set up in a RAID 1+0 configuration. For you non geeks out there, RAID stands for Redundant Array of Independent Disks (though some claim the I stands for Inexpensive, I take no stand on this issue). 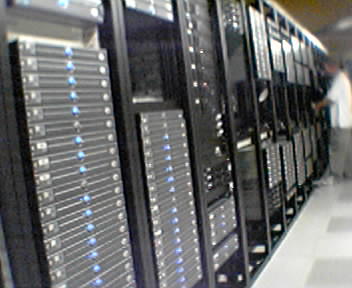 The matrix has you.

The point of a RAID 1+0 array is to provide high performance fault tolerance. Unfortunately, it seems that when one disk goes down in our array, others follow in its wake. Yesterday we had three physical disks report failures and one reported that it would probably fail in the near future. I appreciate the one disk giving us a heads up.

“Umm yeah, those other guys failed you. I think I’ll hum along a bit and fail…say…sixish?”

Luckily for us, one of the failures was a misreport and we were able to immediately bring it online. The other two failures were on separate volumes, thus we could rebuild each of the drives. My coworker and I headed over to the data center to meet with a network engineer from our former parent company to take care of the situation. 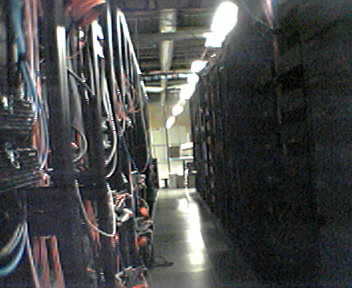 The entrance to the data center has one of them double lock chambers. Swiping a card provides access into the vertical glass tube. At this point you half expect all the air to be sucked out like a physics experiment gone awry. Once the door closes behind you, you swipe the card again in order to exit the tube on the opposite side. It was reminiscent of every episode of ALIAS where Sydney has to infiltrate a data center, only there were no paramilitary guards with machine guns.

The inside was volumnious, with several cages here and there humming with the sound of murmuring server racks. It sort of reminded me of the Core in the Matrix series. Posted prominently in the entrance was a sign forbidding the use of photographic equipment, so we had to place our cameras back in the car. However, my coworker had a phone cam with him and took a couple of pics of our servers. Don’t tell anyone.