I promised a friend I’d show him some pictures of the time we went to burning man in 2002. So of course, I figured might as well make a blog entry about it. For you geeks out there, the Playa (A nearly level area at the bottom of an undrained desert basin, sometimes temporarily covered with water) has a wi-fi network available. Every year, Black Rock City, a temporary city, is formed in the midst of the desert near Gerlach. This city is the host of the Burning Man festival. It’s about a thirteen hour drive from Los Angeles and the closest city is Reno, Nevada which is about 4 hours away.

Let me introduce you to the gang of burners (people who attend Burning Man) that we camped with. Here we are demonstrating the preferred method of locomotion on the Playa. This assumes you’re sober enough to ride correctly, which isn’t as much an issue during the day as it is at night. 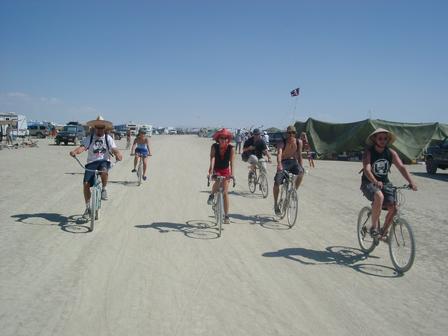 Although the heat is oppresive by day, there’s plenty to see. One of my favorite installations is a replica of the Terror Dome from Mad Max movies. That’s Akumi and myself climbing on it. At night, the dome is covered with people cheering on epic battles as two would-be gladiators strapped with bungie cords swing around whacking each other with foam padded sticks. 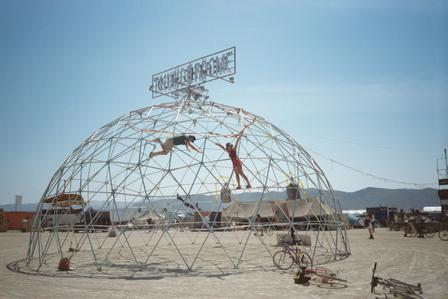 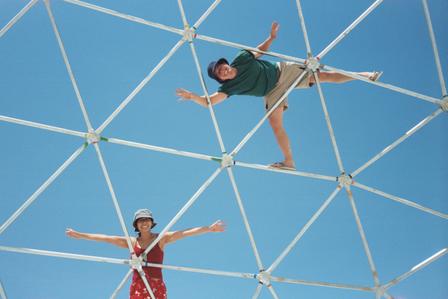 The primary danger on the playa is overheating and dehydration, so be sure to bring plenty of water. That’s not to say that there aren’t other unexpected hazards on the playa. 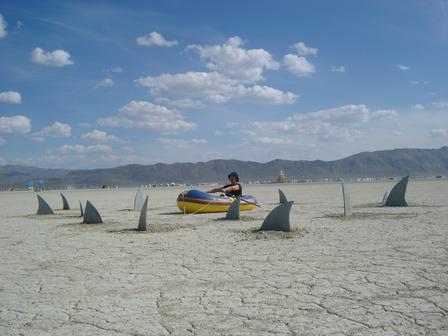 Every year, Burning Man has a theme. The year we went the theme was “A floating world”. This explains the presence of dolphins. 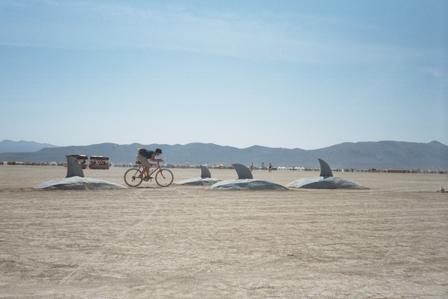 Some of the installations on the playa are truly magnificent, such as the Temple Of Joy. The prior year, the artist who built this temple had built the Temple Of Tears as he had tragically lost a family member (I think his daughter). But in having overcome the pain and sorrow, he built this temple to celebrate the joy he had with her. 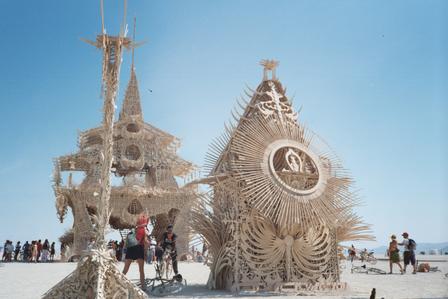 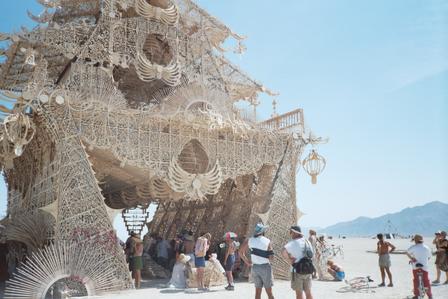 And then, of course, there’s the Man. At night, the Man is totally wired with bright blue neon lights. From any point in the camp, you can pretty much see him standing there as a beacon. Very useful if you happen to be trashed and have wandered off into the darkness of the playa. It’s nearly impossible to get truly lost out there, but people are resourceful and manage to find a way. 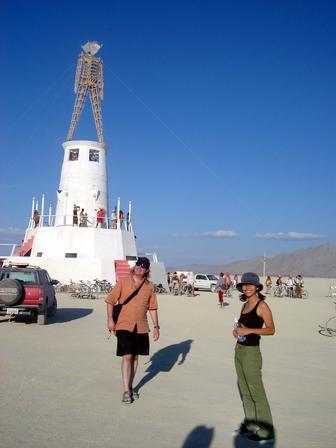 There are the occasional dust storms that can be downright aggravating. We only had to endure one or two. Huddling in the shade shelter we built in the middle of our camp site, we battened down the hatches and munched on snacks. Afterwards, a dust storm will leave a really beautiful sky in its wake. 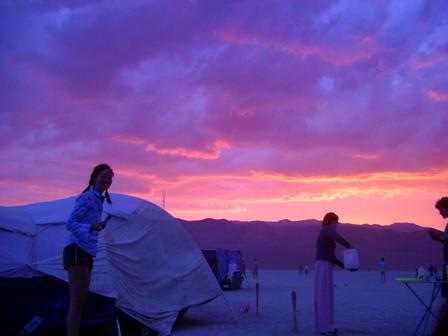 At night, as the temperature dives, the playa really comes alive. I unfortunately don’t have a lot of night pictures, but believe me when I tell you that anything and everything you’ve ever imagined in your sleep is crawling around. This place creates a bull market for the neon and glowstick industry. All the colored lights create a surreal nighttime wonderland. For example, as we walked about, we almost ran into this moving aquarium full of laughing people. 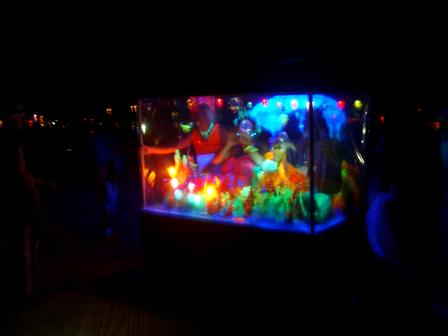 Every day on the playa is a build-up to the big day when they burn the Man. Preceding the burn is a parade of fire walkers, dancers, and mechanical fire-breathing dragons. It’s truly a pyromaniac’s wet dream. The intense heat of “The Burn” conjures up several dust devils with the appearance of sinister tornados dancing on the ashes of the Man. The following day, the Temple of Joy is burned, but we didn’t stay around to see that. 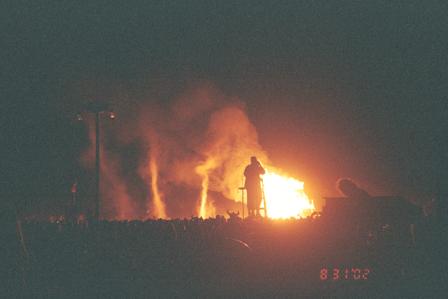