We went camping in Sequoia National Park a couple of weekends ago, a weekend which happened to coincide with our first anniversary! Somehow I convinced my lovely wife that a weekend of camping in the woods among the bears is much preferable to a stay at a nice hotel resort. I mean who wants to be pampered and massaged?

Sequoia National Park is the home of some truly immense trees. I mean really really big trees. The kind of trees that give you a big cramp in the back of your neck if you try to stare at the top for too long, forcing you to walk around staring at the sky causing everyone around you to wonder what the hell you’re looking at. Redwoods may be taller, but no trees have the volume and bulk of the giant sequoias. These things almost seem to generate their own gravity. 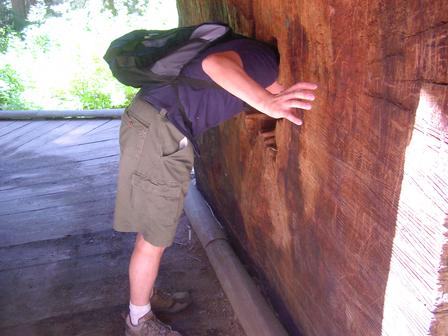 The author loses his head, once again.

This trip found us reuniting with a several members of our intrepid Buring Man 2002 crew. Upon arriving I nearly lost my head at the astounding dimensions of the trees. Pictured above is a little tunnel carved out of a fallen tree. That’s me sticking my head where the sun don’t shine. This fallen tree is one of many among the myriad of trails within the park. If a tree falls in the woods, will it muss up my wife’s pretty pink hat? 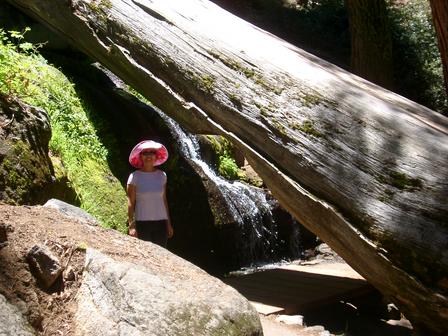 The tree was no match for the power of the hat.

Sequoias are notable for the crazy tree people (though so is Green Peace). If you look carefully, you can see them hiding within the burnt trunk of a large tree. Counterintuitively, Sequoias thrive on fire (though not in the same way Cheech and Chong did). They need the occasional forest fire to to survive and thrive. Fires burn off the undergrowth, removing competition for good soil and water, basically keeping out the riffraff. When procreation becomes a priority, they drop off cones containing hundreds of seeds. The seeds remain safely huddled inside until a fire heats up the cone enough to cause the seeds to release. Wandering through the forest, you’ll notice a large number of trees that have grown a thick layer of bark around the scars from forest fires. 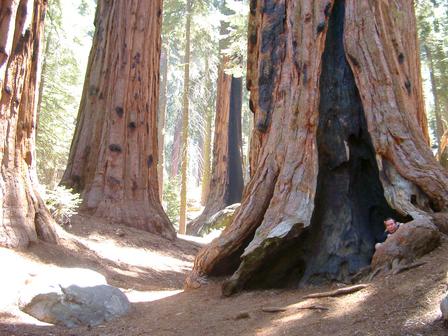 Like a runaway pituitary gland, it’s seems that a giant sequoia never stops growing. They can live for a little over 3000 years and have a diameter (at the base) of up to 36.5 feet. If a tree survives fires and other hazards to reach a massive size, the typical cause of death is falling over from its own weight, much like the Lakers did in the finals recently. As can be seen below, its roots don’t run very deep. They dig in a mere three feet. 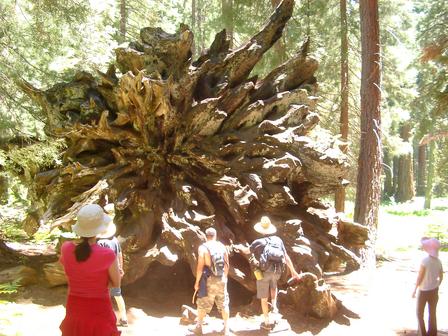 So how do we drag this thing home?

We had this sequoia surrounded, but it wouldn’t be bullied by us and didn’t give up its wallet. 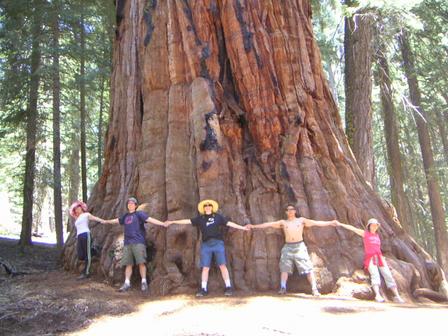 When camping in Sequoia, the rangers go to great pains to make sure you observe proper bear safety. They’ll go on and on about keeping all food and scented items safely stored away in bear containers. Don’t keep any food in your tent. Don’t feed the bears, no matter how cute they seem or how many GMail invites they offer. Apparently feeding a bear human is equivalent to giving them bear crack. They quickly acquire a taste for it and will go to great lengths to get more. They’ve been known to peel down the window of a car to get at the potential food inside. Sadly, this typically leads to the bears being put down. There were several bear sitings within the campgrounds, including the one sneaking up from behind me in the following photo. 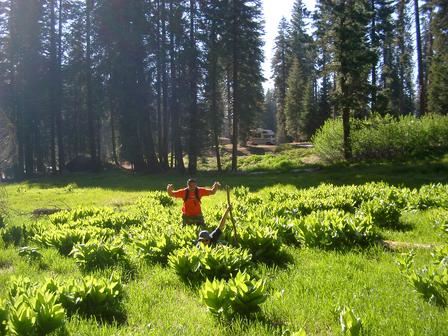 A nearby campsite had a black bear crawl on top of their truck and scratch it up a bit, apparently looking for the keys to take it for a joy ride. We spotted the culprit the next morning relaxing in the sun. 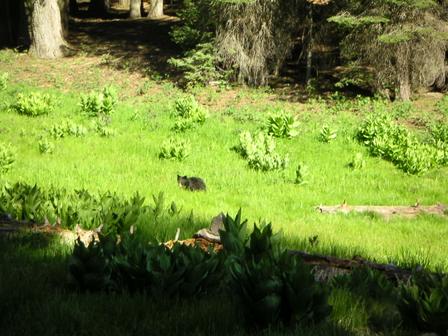 BooBoo was relieved to finally get rid of that annoying Yogi.