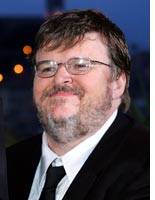 I found this scathing review on Slate of Michael Moore and his upcoming flick, Fahrenheit 9/11 I have yet to see the movie but plan to soon. It’s good to read a critical review to make sure I have a balanced view of the movie.

I don’t doubt that Michael Moore is biased and self-serving. His movie is designed to provoke a strong reaction, and whether the facts are misinterpreted or self-contradicting, that’s not important to his goals. I figure I will have to take his message with a grain of salt. Many will see his movie once, while they watch Fox news every day. The truth probably lies somewhere in the middle.

As a counterpoint to the scathing review, I offer up another review that points out the great lengths the Moore team went to fact check all their assertions. The review does point out that Moore does insert his prejudices in places, but that his central assertion is well-founded.

Moore is on firm ground in arguing that the Bushes, like many prominent Texas families with oil interests, have profited handsomely from their relationships with prominent Saudis, including members of the royal family and of the large and fabulously wealthy bin Laden clan, which has insisted it long ago disowned Osama.