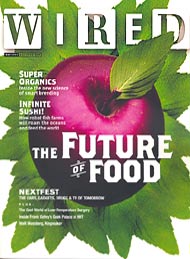 I just finished reading an essay in the latest edition of Wired by Gary Wolf entitled “The Return Of Push!” discussing whether or not RSS will realize his prediction made seven years ago. His prediction in Wired 5.03 was that web browsers were about to become obsolete due to push technologies such as PointCast.

Instead, browsers flourished while PointCast whithered. In the essay, he mentions a point that Meg Hourihan, cofounder of Pyra Labs (think Blogger), makes that RSS depends on a “polling” system which she feels is inadequate.

Can you imagine 1 million news readers all checking 300-plus sites every 15 minutes? Or even every hour? It’s no horribly inneficient.

She hopes to see some sort of peer-to-peer solution.

At the moment (and perhaps due to ignorance), I’m skeptical that this is a serious problem for several reasons: 1. It is unlikely that these millions of aggregators will all hit the same site at the same time. The traffic patterns are more predictable and steady than what one sees when a news story breaks on a news site. 2. Many RSS aggregators such as RSS Bandit and web sites implement conditional GET requests so that new content is only downloaded when there’s something new to get. 3. The actual RSS feed is something that is very static in the sense that it is updated rarely and there’s no need to dynamically personalize the content (in general). Thus, it is possible for blogging tools to generate a static RSS file after updates. Static files are served quite efficiently by a web server.

Having said that, the idea of merging P2P with something like RSS Bandit is intriguing. I’m about to throw out some crazy ideas here. The good ones are the result of my evil genius, and the bad ones are due to the muscle relaxants I’m on and the late hour.

If the polling system truly becomes inefficient, perhaps a technology like BitTorrent can be incorporated. In such a situation, I wouldn’t necessarily get feed updates from the source, but rather get it from a P2P network.

In terms of improving the social networking aspects, how about tighter integration with blogging tools. For example, in a very narcissistic fashion, I subscribe to my own feed. Suppose I could configure RSS Bandit with my user name and password to my .TEXT blog so that when someone posts a comment on my blog via RSS Bandit, our aggregators would make a P2P connection and the comment would appear as an IM within RSS Bandit (or MSN Messenger… who knows?). Then I could reply to the comment immediately and the ensuing conversation might appear in the comments section of the blog.

Perhaps when I first get online, RSS Bandit would give my own blog special treatment so that I can automatically see all new comments on my own blog.