Azure has a neat feature that runs Azure Functions from a package file (aka a zip file). This same feature also applies to Azure Web Apps, though you wouldn’t know it from the documentation. The Run from Package docs only mention Azure Functions. The GitHub issue that announced the feature makes it clear this also applies to Web Apps.

Run From Package is an exciting new feature which lets you run a Web App or Function App by simply pointing it to a zip file containing your files.

There are some cool benefits of this approach according to the docs.

Performance doesn’t seem to be an issue (caching is probably involved).

You’re a busy developer, so I’ll get right to the punchline. Nevermind that I spent hours to get this to work.

If you’re using Azure Pipelines to deploy to a Web App using this feature, most of the docs will point you to the Azure App Service Deploy task. In the azure-pipelines.yaml, you invoke this task using AzureRmWebAppDeployment@3.

I could not get that to work. Instead, I discovered another task, Azure Web App which you invoke with AzureWebApp@1. That’s the one that worked for me.

Read on to learn of my harrowing journey to discover this and more details on how to set this all up.

Before I go further, let me clear up some terminology. Azure terminology keeps me in a constant state of confusion. For example, if you go to your portal, you won’t see any navigation item for web apps.

What you’re looking for is an App Service. Per the App Service documentation

Azure App Service enables you to build and host web apps, mobile back ends, and RESTful APIs in the programming language of your choice without managing infrastructure. It offers auto-scaling and high availability, supports both Windows and Linux, and enables automated deployments from GitHub, Azure DevOps, or any Git repo. Learn how to use Azure App Service with our quickstarts, tutorials, and samples.

A Web App is one of the types of App Services. When you click on App Services in the left navigation, the portal displays a list of your app services. Your web apps will have an App Type of Web App.

What’s confusing to me is that a Function App is not listed in the documentation for Azure App Services. It is logically a first class citizen in its own right. But, when you list your App Services, you’ll see Function Apps listed with the App Type of Function App. I assume they’re implemented the same way, which is why Run From Package works for Web Apps as well as Function Apps.

According to the docs,

To clarify, when they mention a “setting” here, it refers to an Application Setting. In the portal, you can set this by navigating to your App Service (Web App or Function App). Then click on the Configuration link under the Settings heading in secondary navigation on the left.

Make sure you’re on the Application Settings tab and click New application setting as shown in the screenshot. 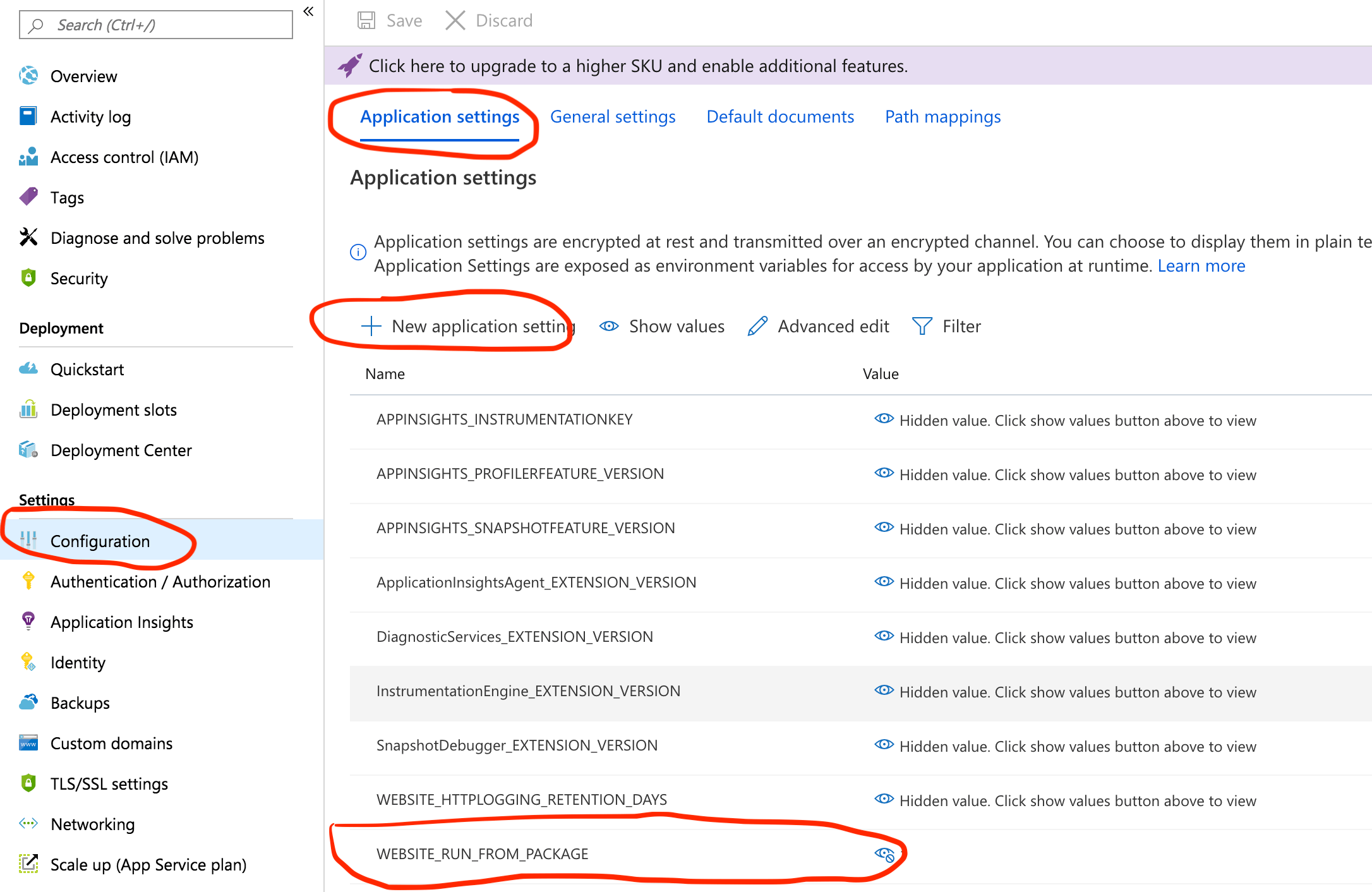 There are two values you can set for this setting.

According to the documentation:

Run from a package file in the d:\home\data\SitePackages folder of your function app. If not deploying with zip deploy, this option requires the folder to also have a file named packagename.txt. This file contains only the name of the package file in folder, without any whitespace.

I like this option because in theory, it’s less moving parts. However, to get it all to work turned out to be a pain because of some confusing documentation.

If you’re running a Web App in App Services, Azure provides this useful administrative Kudu website. Kudu is a deployment system for deploying web apps to Azure from many sources.

To get to the website, append .scm to your web app’s URL in the right place. For example, when you set up a web app, Azure will give you a URL that looks like: https://my-app-name.azurewebsites.net.

All you have to do is insert scm. between your app name and azurewebsites.net. Thus in the example above, you’d visit https://my-app-name.scm.azurewebsites.net in your browser.

In the menu, select CMD or PowerShell. This gives you access to both a terminal shell as well as the directory structure. 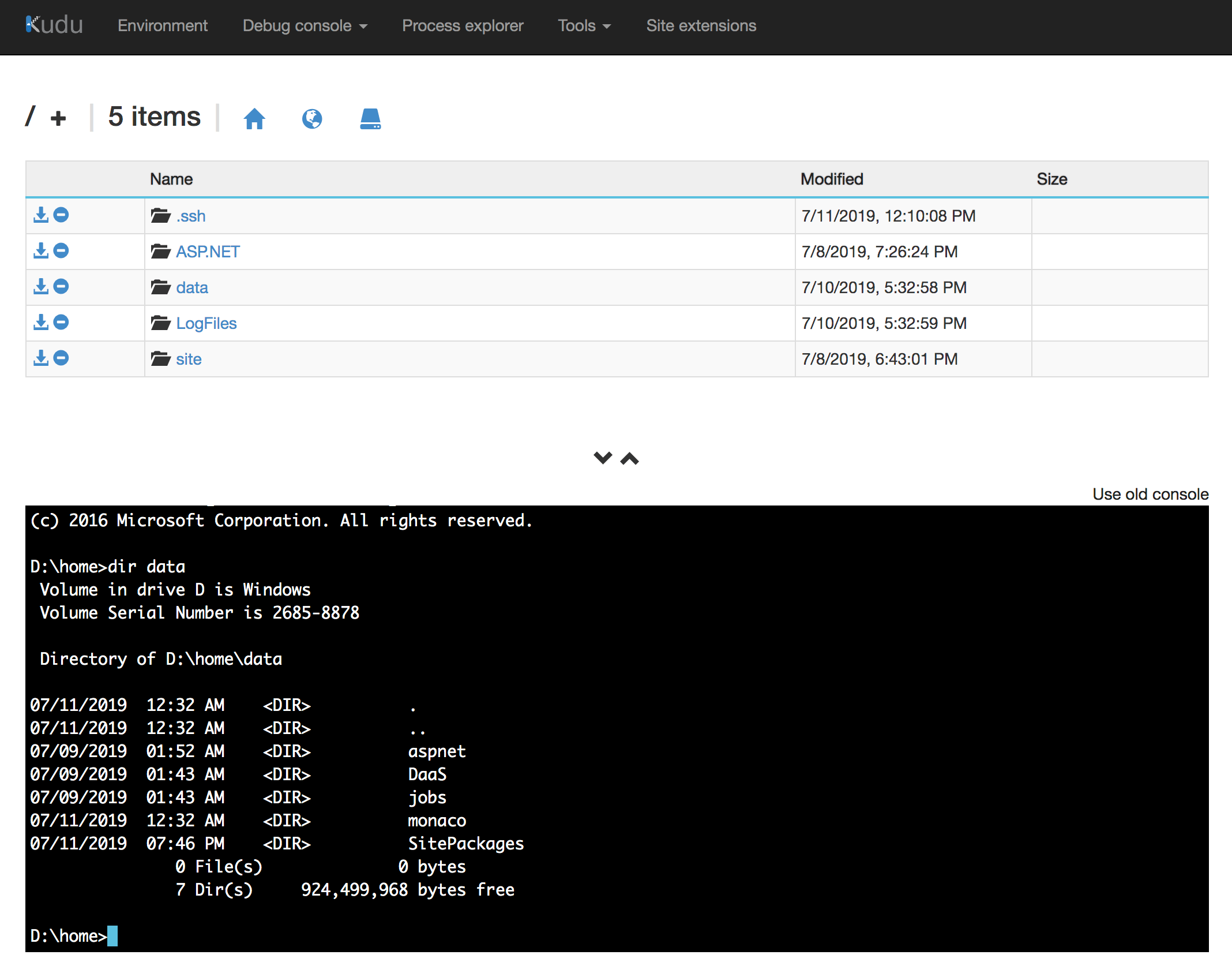 You can use the web UI (or shell) to create the SitePackages folder. You can also drag and drop files onto the web page to upload them to the folders.

If you want to do a manual deployment to test out running from a package file, you might run the following steps.

Now you should be able to visit your site and see that it’s running from the zip package.

If you recall, earlier I noted the following statement in the docs:

If not deploying with zip deploy, this option requires the folder to also have a file named packagename.txt.

A natural question is, what is a Zip Deploy? Well, I found these docs. Those aren’t helpful because I want to use Azure Functions to deploy the app.

I then found this documentation on how to Deploy an Azure Web App. It mentions the Azure App Service Deploy task which is invoked via AzureRmWebAppDeployment@3 when using Yaml with Azure pipelines.

I read the docs on that. It has a section with the heading Run From Package. Now we’re getting somewhere. It states,

Creates the same deployment package as Zip Deploy. However, instead of deploying files to the wwwroot folder, the entire package is mounted by the Functions runtime and files in the wwwroot folder become read-only. For more information, see Run your Azure Functions from a package file.

Typically, if you use the AzureRmWebAppDeployment@3 task, it extracts the zip package and deploys it to D:\home\site\wwwroot. But you don’t want that if you plan to run from package. In fact, when you enabled Run From Package, that changes your wwwroot to be read-only. Which makes sense. This deployment task is supposed to understand this setting and instead of deploying to wwwroot, it should deploy to SitePackages and create the packagename.txt file automatically.

Note, I said should. Here’s the yaml I tried when I set out to set up an automatic deployment.

I also tried runFromPackage as well as leaving DeploymentType blank. Nothing worked. In the debug logs (I’ll explain how I turned that on later), I noticed it was trying to do a PUT request to /site/wwwroot and getting access denied. Well of course access is denied, wwwroot is read-only now.

I couldn’t understand why the deployment task wasn’t working as advertized. I was lucky and happened to be clicking around the list of deploy tasks for Azure Pipelines and discovered one named Azure Web App Task. At first I ignored it because it didn’t have the word “deploy” in the task name. But then I read the description.

Use this task to deploy web applications to Azure App service.

I didn’t find much in the way of documentation that points to it as an option. Either way, I’m glad I found it and I hope this saves you time and keeps you from headaches.

To help debug issues with my deployment, I turned on debug logging in Azure Pipelines. To do this, add the system.debug: true variable to your yaml file. For example, here’s the set of variables in mine.

This will spit out a lot of extra details in your Azure Pipelines log. You may want to turn it back off when you no longer have issues.