The Magic 8-ball toy is a toy usually good for maybe one or two laughs before it quickly gets boring. Even so, some have been known to make all their important life/strategic decisions using it, or an equivalent mechanism.

The way the toy works is you ask it a question, shake it, and the answer to your question appears in a little viewport. What you’re seeing is one side of an icosahedron (20-sided polyhedron, or for you D&D folks, a d20). On each face of the d20 is a potential answer to your yes or no question. 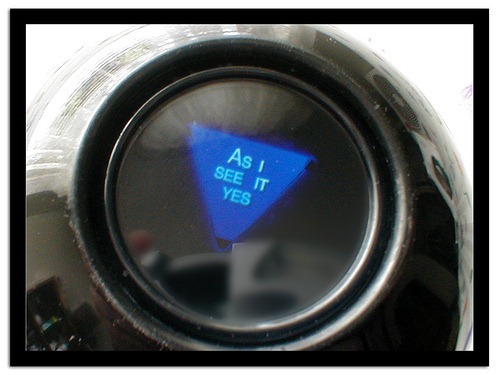 I thought it would be fun to write a NuGet package that emulates this toy as one of my demos for the NuGet talk at Mix11. Yes, I am odd when it comes to defining what I think is fun. When you install the package, it adds a new command to the Package Manager Console.

The command I wrote didn’t have twenty possible answers, because I was lazy, but it followed the same general format. This command also includes support for tab expansions, which feel a lot like Intellisense.

The following screenshot shows an example of this new command, Get-Answer, in use. Note that when you hit tab after typing the command, you can see a tab expansion suggesting a set of questions. It’s important to note that unlike Intellisense, you are free to ignore the tab expansion here and type in any question you want.

In this blog post, I will walk through how I wrote and packaged that command. I must warn you, I’m no PowerShell expert. I wrote this as a learning experience with the help of other PS experts.

The first thing to do is write an init.ps1 file. As described in the NuGet documentation for creating a package on CodePlex:

This script is useful for packages that need to add commands to the console because they’ll run each time the solution is opened. Here’s what my init.ps1 file looks like:

The first line declares the set of parameters to the script. These are the parameters that NuGet will pass into the init.ps1 script (note that install.ps1, a different script that can be included in NuGet packages, receives a fourth $project parameter).

The second line of the script is used to import a PowerShell module. In this case, we specify a script named MagicEightBall.psm1 by its full path. We could write the entire script here in init.ps1, but I’ve been told it’s good form to simply write scripts as modules and then import them via init.ps1and I have no reason to not believe my source. I suppose init.ps1 could also import multiple modules rather than one.

Let’s look at the code for MagicEightBall.psm1. It’s pretty brief!

The first line of code simply declares an array of answers. The real Magic Eight Ball has 20 in all, so feel free to add them all there.

I then define a function named Get-Answer. The implementation demonstrates one of the cool things I like about Powershell. I can simply pipe it into the Get-Random method and it returns a random answer from the array.

Skipping to the end, the last line of code calls Export-Module on this function, which makes it available in the Package Manager Console.

So what about that middle bit of code that calls Register-TabExpansion? Glad you asked. That function provides the Intellisense-like behavior for our function by registering a tab expansion.

It takes two parameters, the first is the name of the function, in this case Get-Answer. The second is a dictionary where the keys are the names of the parameters of the function, and the values contain an array of expansion options for that function. Since are function only has one parameter named question, we add 'question' as the key to the dictionary and supply an array of potential questions as the value.

With these two files in place, I simply opened up Package Explorer and selected File > New from the menu to start a new package and dragged both of the script files into the Package contentswindow. NuGet recognized the files as being PowerShell scripts and offered to put them in the Tools folder.

I then selected Edit > Edit Package Metadata from the menu to enter the NuSpec metadata for the package and clicked OK at the bottom. 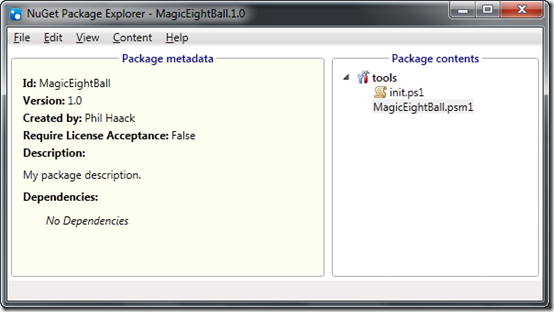 With all that done, I selected the File > Save As… menu to save the package on disk so I could test it out. Once I was done testing, I selected File > Publish to publish the package to the real NuGet feed.

It’s really that simple to write a package that adds a command to the Package Manager console complete with tab expansions.