Whew! I’ve finally found a bit of time to write about my impressions of the PDC 2008 conference. If you’re looking for insightful commentary and a “What does this all mean” post, you’ve come to the wrong place. There are plenty of others providing that sort of commentary. I’ll just string together some random impressions and pics from my perspective. 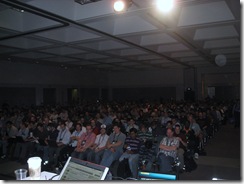 First of all, one thing I’m very impressed with is that all sessions are viewable online almost immediately afterwards, with full video of the slides and the presenter. Now I understand why they asked me not to pace too much. To see my presentation, visit its Channel9 Page. Note that my slides and sample code are now up there. 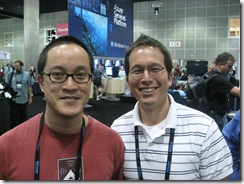 I hade a great time delivering this talk (see photo of the room before I started above) and as I wrote before, I uncovered a new presentation tip.

There were 1150 attendees at the talk. If you saw my talk, be sure to submit an eval as the last time I checked, only 95 people did. 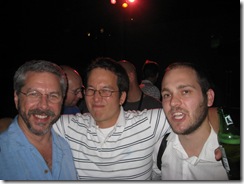 Of course the best part of the conference (besides excessive amounts of RockBand) is hanging out with the people! I spent time at the ASP.NET lounge at various points in the conference answering a boatload of questions about ASP.NET MVC. This has inspired a nice backlog of posts I should write.

I also spent a lot of time in the Open Spaces area enjoying the geekout sessions. Especially Dustin Campbell’s session on currying, closures, etc… which turned into a discussion of functional languages as I was showing up. 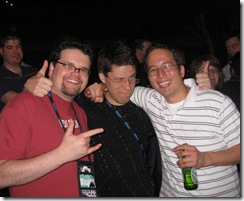 Of course, the various parties were great too. I don’t have pictures of the Universal Studios trip, unfortunately, but I will say the Simpson’s ride was awesome. I only brought my camera to the Dev After Dark party, on Wednesday night, which is where most of these are from.

As you can see here, Jeff Atwood, Miguel De Icaza, and myself having a good time at the JLounge. We tried to get it renamed to NLounge, but to no avail. 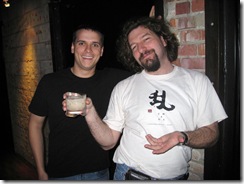 One of the highlights of the evening was running into my coworker’s hero, The Dude from The Big Lebowski holding a white russian!

Ok, it’s actually Ted Neward graciously posing with my drink as this was probably the 2048^th^ time he heard this joke. 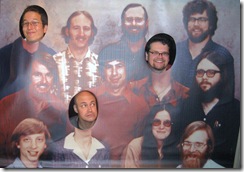 And wouldn’t you know it, but the Microsofties from the early days showed up to the party. There’s young Bill in the lower left corner.

It was very interesting to meet so many people in person who I’ve “met” before via comments in our forums, on my blog, Twitter, etc…

Especially in the cases where a person in the past reported a bug in a forum, and then at PDC had the opportunity to explain it to me so that we both understood the issue more clearly. In any case, I’m hopefully done travelling for the year.