Yet despite all that, I still love the place. Maybe because despite the bad things, Vegas is really the Disneyland for adults with a slight bad streak inside that yearns to get out once in a while to indugle in a vice or three.

I especially love the Mix conference there. As Jeff Atwood writes (and I agree)…

What I love about Mix is that it …

Some highlights from Mix include seeing old friends again such as Jon, Steve, and Miguel. Also enjoyed having time to hang with my coworkers in a non work setting after having imbibed much alcohol. And of course meeting a lot of people I know through the intarweb such as Kevin Dente, Steven Smith, and Dave Laribee among others I’m forgetting at the moment.

I also played Poker for the first time at a casino and I had a blast, leaving with some winnings despite losing four close showdowns, a couple of them in which my pocket Kings were beaten by pocket Aces. Who’d a thunk it?!

The past couple of weeks have been a rough time for me and my family. I missed a few days of work due to a bad fever, and my wife then suffered through the same fever the following week. Fortunately Cody hasn’t seemed to have caught the fever. 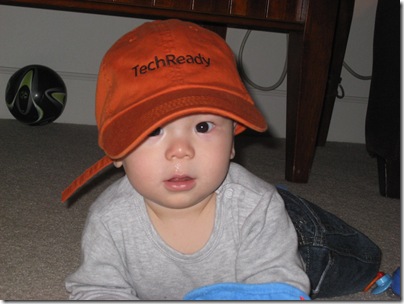 In a week, we will finally move into our new home. While our temporary housing has been nice, we’ve been here a long while and it’s just hard to feel settled when we are not in our own home. Once we move into our house and make it our own, I think we’ll finally feel settled into this place and find our rhythm here. Who knows, maybe I’ll have more time for my extracurricular activities I used to do.

Speaking of extracurricular, I have joined two soccer leagues now, the GSSL (Greater Seattle Soccer League) and the MSSL (Microsoft Soccer League). Unfortunately, my foot is injured due to a hard tackle so I didn’t have a good showing in my first MSSL game today.

In the past month, I’ve given several talks, some that went well and one that went…how should I put it…very badly. Hopefully I will be asked to speak again. At least my TechReady (an internal talk) went well with 240 attendees, but probably because Scott Hanselman carried the both of us. ;) That boy can talk!

If you’ve read this far expecting technical content, my apologies, it’s a Saturday. We just had an updated preview of MVC released and I will be writing about that in some upcoming posts. In the meanwhile, the sun just came up outside for once and my mood is lifted after a dark few weeks. Things are starting to look up for me in this town. Hope things are well with you as well.