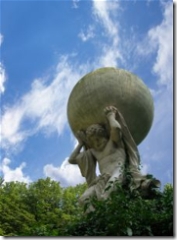 I read this article recently that describes the mind frying complexity of the Windows development process.  With Vista sporting around 50 million lines of code, it’s no wonder Vista suffers from delays.  Quick, what does line #37,920,117 say?

Microsoft has acknowledged the need to release more often (as in sometime this millenia), but that agility is difficult to achieve with the current codebase due to its immense complexity as well as Microsoft’s (stubbornly?) heroic efforts to maintain backward compatibilty.  The author of the article labels this the Curse of Backward Compatibility.

I don’t think anyone doubts that maintaining backwards compatibility can be a Herculean effort because it goes beyond supporting legacy specification (which is challenging enough).  Just look at how Microsoft supports old code that broke the rules.  Additionally, the fact that old code poses a security threat requires even more code to patch those security threats.  Ideally alot of that code would be removed outright, but it is challenging to remove or rewrite any of it in fear of breaking too many applications.

Of course there are very good business reasons for Microsoft to maintain this religious adherence to backwards compatibility (starts with an m ends with a y and has one in the middle).  The primary one being they have a huge user base when compared to Apple, which does not give Microsoft the luxury of a “Do Over” as Apple has done with OSX.

A different article (same magazine) points to virtualization technology as the answer.  This article talks suggests a virtualization layer that is core to the operating system.  I think we are already seeing hints of this in play with Microsoft’s answer to developers angry that Vista is not going to support Visual Studio.NET 2003.

The big technical challenge is with enabling scenarios like advanced debugging. Debuggers are incredibly invasive in a process, and so changes in how an OS handles memory layout can have big impacts on it. Vista did a lot of work in this release to tighten security and lock down process/memory usage - which is what is affecting both the VS debugger, as well as every other debugger out there. Since the VS debugger is particularly rich (multi-language, managed/native interop, COM + Jscript integration, etc) - it will need additional work to fully support all scenarios on Vista. That is also the reason we are releasing a special servicing release after VS 2005 SP1 specific to Vista - to make sure everything (and especially debugging and profiling) work in all scenarios. It is actually several man-months of work (we’ve had a team working on this for quite awhile). Note that the .NET 1.1 (and ASP.NET 1.1) is fully supported at runtime on Vista. VS 2003 will mostly work on Vista. What we are saying, though, is that there will be some scenarios where VS 2003 doesn’t work (or work well) on Vista - hence the reason it isn’t a supported scenario. Instead, we recommend using a VPC/VM image for VS 2003 development to ensure 100% compat.

This answer did not satisfy everyone (which answer does?), many seeing it as a copout as it pretty much states that to maintain backward compatibility, use Virtual PC.

Keep in mind that this particular scenario is not going to affect the average user.  Instead, it affects developers, who are notorious for being early adopters and, one would think, would be more amenable to adopting virtualization as an answer, because hey! It’s cool new technology!

Personally I am satisfied by this answer because I have no plans to upgrade to Vista any time soon (my very own copout).  Sure, it’s not the best answer I would’ve hoped for if I was planning an impending upgrade.  But given a choice between a more secure Vista released sooner, or a several months delay to make sure that developers with advanced debugging needs on VS.NET 2003 are happy, I’m going to have to say go ahead and break with backward compatibility.  But at the same time, push out the .NET 2.0 Framework as a required update to Windows XP.

With Windows XP, Microsoft finally released a consumer operating system that was good enough.  Many users will not need to upgrade to Vista for a looong time.  I think it is probably a good time to start looking at cleaning up and modularizing that 50 million line rambling historical record they call a codebase.

If my DOS app circa 1986 stops working on Vista, so be it.  If I’m still running DOS apps, am I really upgrading to Vista?  Using a virtual operating system may not be the best answer we could hope for, but I think it’s good enough and should hopefully free Microsoft up to really take Windows to the next level.  It may cause some difficulties, but there’s no easy path to paying off the immense design debt that Microsoft has accrued with Windows.