99.99999% of the time (yes, I measured it), a controller in ASP.NET MVC is a type, and an action is a method — with reflection as the glue that holds it all together. For most folks, that’s the best way to view how ASP.NET MVC works.

But some folks like to dig deeper and get their hands dirty a bit by taking a peek under the hood. Doing so reveals that while the reflection based mapping of controllers types and actions to methods is true by default, it can be easily changed to something else entirely.

ASP.NET MVC contains powerful abstractions for the controllers and actions via the ControllerDescriptor and ActionDescriptor classes. These abstractions make it possible to implement completely different underlying implementations of a controller and action. For example, one could implement a version of ASP.NET MVC on top of a dynamic language using the DLR such as the IronRuby ASP.NET MVC I wrote about a long time ago.

Using these abstractions, we can implement something useful like a Controller Inspector, a nice complement to the Route Debugger I wrote a while back.

The Controller Inspector is available as a NuGet package with the package id MvcHaack.ControllerInspector (my Paint.net skills are top notch!).

After installing the package, visit any URL in your application rendered by a controller action. For example, here’s a standard request for a boring action.

With the package installed and while running the site on localhost (it won’t work when the site is deployed), append the query string parameter ?inspect. For example, in my sample, I just visit: http://localhost:38249/?inspect and voila! 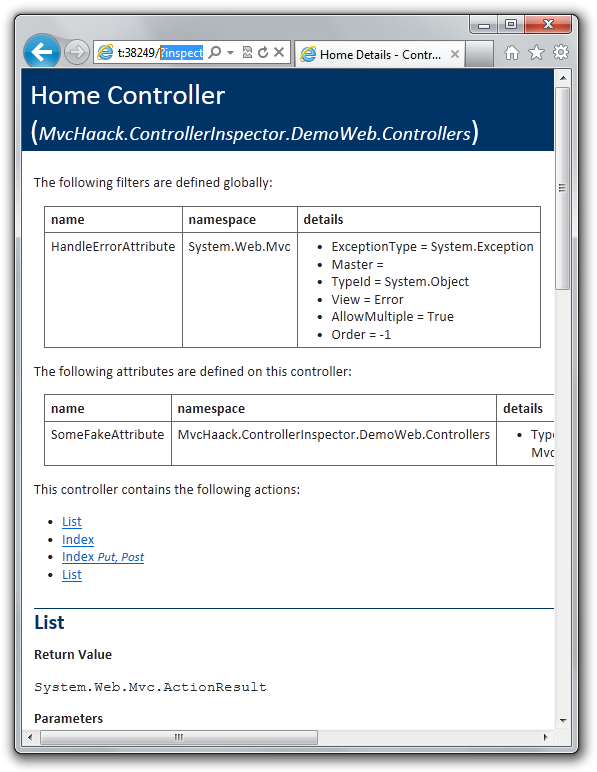 I nicely formatted page that displays information about the controller and each of its actions. If you’re wondering, “hey, isn’t this like Glimpse!” please skip to the end of this blog post where I address that.

Here’s a look at an action method. 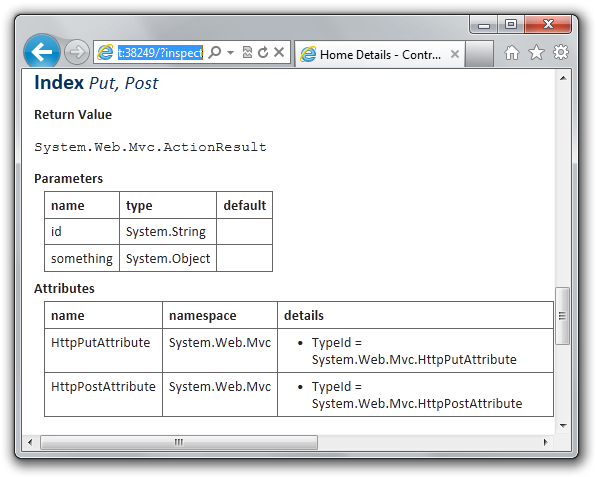 Notice that it conveniently shows the HTTP verbs next to the name to differentiate action methods of the same name. If an action method accepts a complex type as a parameter, the inspector displays details about that type (though not recursively yet). 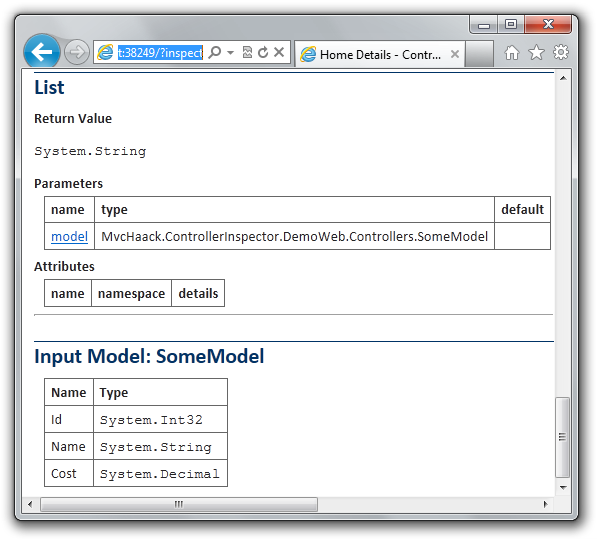 The ControllerDescriptor class provides ways to get at metadata about the controller. The interesting members include:

In the case of the default controller descriptor, ReflectedControllerDescriptor, the filters returned by GetCustomAttributes are retrieved via reflection. But a custom descriptor could load those filters from elsewhere (as is the case with the IronRuby implementation).

The ActionDescriptor also has a few interesting properties.

Despite what you might expect, you can’t obtain everything you’d want to know from an ActionDescriptor. For example, if you’re interested in the return type of an action method, the ActionDescriptor won’t help? Why not? Well, it may be impossible to tell you that. For example, the type might not be known ahead of time because it requires the action method to be invoked first, as would be the case in a dynamically typed language.

So these abstractions were carefully designed not to assume too much about the underlying implementation of an action/controller.

But as we learned before, 99.99999% of the time we’re dealing with the default reflection based approach. So what the Controller Inspector does is to try and cast the ActionDescriptor to ReflectedActionDescriptor and if that succeeds, it can reflect over the action method normally to provide a lot more details.

To hook the code up that outputs all this information, I made use of David Ebbo’s WebActivator package. This allows me to run a bit of code at startup that replaces the current controller factory with an InspectorControllerFactory.

The InspectorControllerFactory wraps the existing controller factory. All it does is call into the existing factory to create a controller, and if the request is a local request with the proper “inspect” query string parameter, it sets its invoker to be an InspectorActionInvoker. This way, for normal requests, there is pretty much no overhead.

What the InspectorActionInvoker does is build up a model of all the information we want to display and passes it to a precompiled Razor template using the approach I wrote about recently in Text Templating using Razor the easy way. I simply build up a huge anonymous class and pass it to a dynamic model in the template. Note that this probably won’t work in medium trust, but I can easily fix that later by either using an ExpandoObject or by using a strongly typed model. I was just being lazy as this is a proof of concept.

As soon as I showed this to some co-workers they asked me why I was trying to re-implement Glimpse. If you haven’t heard of Glimpse, stop and go read this blog post. Glimpse is like a server-side Firebug for ASP.NET MVC applications. However, when I last checked, it didn’t have something exactly like this.

The point in writing this was to teach folks about the ControllerDescriptor and ActionDescriptor. I’ll make the code available later when I finish part three of this informal series and perhaps someone can help me turn this into a Glimpse plugin if that makes sense. In the meanwhile, I built the package with symbols so you can debug into it to see the source.

UPDATE: The code is available on Github!

As a reminder, to try it out, install the MvcHaack.ControllerInspector package then use the ?inspect query string parameter when viewing a page rendered by a controller.